tranzit.hu at the OFF-Biennale Budapest

Alexandra Pirici and Manuel Pelmus use enactment as a strategy to actualize, but also to de-scale and de-monumentalize significant artworks or even situations and events that are somehow connected to art history. They use these art historical references as starting points to produce new immaterial works that feature performers wearing everyday clothes, using only their bodies and voices. In 2013, as invited artists of the Romanian Pavilion, they selected works from the Venice Biennale’s more than century-long history for An Immaterial Retrospective of the Venice Biennale, while the following year in Paris they presented Just Pompidou it. A Retrospective of Centre Pompidou. In response to tranzit.hu’s invitation, the Bucharest-based artists propose a long duration enactment/quotation of Japanese artist Mieko Shiomi’s Fluxus action, Disappearing Music for Face, as part of the OFF-Biennale Budapest.

In the work of Shiomi a smile slowly fades into a neutral facial expression. In cooperation with performers, Pirici and Pelmus will create a sculpture-like machine that reflects on the declared aims of the OFF-Biennale, too. At the same time, their on-going action is a comment not only on the current situation in Hungary—where nationalist isolationism increases and art initiatives are subsumed under ideological control—but also in a larger, global context. As the performers struggle to keep finding a reason to smile, the very long “disappearing music for face” could enact, in a both sad and funny way, the effort we make in finding a reason to keep struggling.

The project will be realized as part of the OFF-Biennale Budapest. 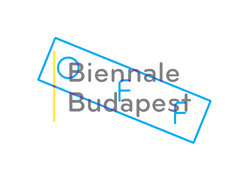 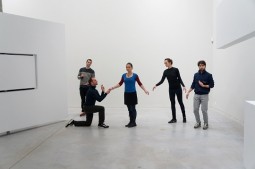