János Kósa: Offering, 2010
Offering is a particular, surreal, picturesque montage that reflects on one of the ancient topoi of Hungarian culture: Saint Stephen, the first King of Hungary, offers his crown symbolizing the country to the protection of the Virgin Mary. The medieval topos appeared on numerous altarpieces during Romanticism and Historicism in the 19th century, and was painted by Hungarian historicist painter Gyula Benczúr as well, from where Kósa transferred the figure of the angel to his own painting. In the Offering, however, the angel supports not the Virgin Mary, but Vladimir Ilyich Lenin, whose gesture evokes another ancient pathos formula: "Let the children come to me." In the age of Socialist Realism, Lenin appeared in visual culture not only in a triumphant pose or in one foreseeing a happier future, but also as the son and shepherd of the people whose pathos also pervaded the imagery of Stalin and his Hungarian counterpart, Mátyás Rákosi. However, Kósa's painting is neither a Romantic altarpiece nor a Socialist Realist genre painting: the aging Saint Stephen offers a toy crown to the likewise balding Lenin, who is nurtured by the angel of Benczúr, while the composition also features figures such as a harlequin in a rhomboid pattern dress, characteristic of Picasso’s Rose Period. The grotesque and uncanny language of Dada, Surrealism, and Magical Realism is relevant again in today’s Eastern, Central-Eastern Europe, for reasons of memory politics: as the various regime changes repeatedly replaced the symbolic figures of power, the simple, almost infantile, feudal power structures have remained in place until today. 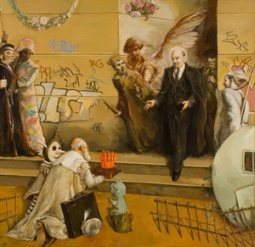