The Postcolonial 21st Century: Central Europe and Beyond - A seminar with David Chioni Moore and Vít Havránek

Please send your applications to office@tranzitinfo.hu until October 10, 2011.

The fall seminar of the Free School for Art Theory and Practice is based on the dialogue of cultural theorist and university professor David Chioni Moore (Saint Paul, Minnesota, USA) and curator/ theorist Vít Havránek, director of tranzit. cz (Prague, Czech Republic).

The seminar will be based on a dialogue between two leading figures in the application of postcolonial perspectives and theories across geographic regions and cultural fields. David Chioni Moore will focus on historical, literary, and comparative-geographic questions. Vít Havránek will represent art-historical, contemporary-art, and curatorial aspects of this question. Together, and in dialogue with the participant, they will focus on if, and how, the postcolonial perspective can be applied to post-Soviet states, especially in Central Europe, especially in the arts. We will examine theories, readings, concrete historical and current issues, case studies, and specific artists

Our aim is to test postcolonial theory for historical and current subjects, historical facts, and artistic practices in a region that has undergone vast changes in politics, culture, and national conception in recent years.


David Moore has published widely on these and other topics in journals including Genre, PMLA, Research in African Literatures, Novel,Transition, Safundi, The Cambridge History of American Poetry, Callaloo, Diaspora, the Slavic and East European Journal, Resources for American Literary Study, the Journal of Anthropological Research, Accounting Organizations & Society, and other venues. He frequently reviews new African literature for the African Book Publishing Record, and has lectured at Harvard, Yale, Maryland, UCLA, SOAS, Hawaii, Wesleyan, Cambridge, Notre Dame, and other venues. Notably, his 2001 article on the postcolonial and the post-Soviet has been multiply translated and republished. Dr. Moore was editor of Martin Bernal's Black Athena Writes Back, and is currently completing an edition of the African American poet Langston Hughes's 1930s writings on Soviet Central Asia.

13.30-16.00
Discussion by participants. We ask the various people attending the seminar to speak about their own work in the context of our theme. Comments, questions, fresh points by lecturers.

Day One conclusion and preview of Day Two.

Vít Havránek: Some well known artistic practices of the 1960s revisited in the time of Post-Bipolar History

16.00
Departure to visit the exhibition Surveillance. Budapest and Prague through the Eyes of the State Security Services at the Open Society archive

During some drinks: Conclusion, discussion of the "future of the post."
Concluding remarks by David and Vit.


The archive is realised in the framework of the international project, Recuperating the Invisible Past, which receives a grant from the Culture 2007 programme of the European Union. 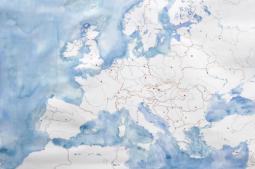