The project currently exists as an online archive of exhibitions, see the website here: http://tranzit.org/exhibitionarchive


In the framework of the project "Recuperating the Invisible Past" the exhibition Parallel Chronologies - Invisible History of Exhibitions is organized in Riga Art Space by tranzit.hu and LCCA.

Parallel Chronologies has been presented so far as an exhibition in Budapest in 2009, and in Karlsruhe in 2010. In Riga tranzit.hu presents two parallel projects, "Other" Revolutionary Traditions by Sándor Hornyik and How Art Becomes Public by Dóra Hegyi and Zsuzsa László accompanied by the contribution from Latvia, Estonia and Lithuania by LCCA (curator Ieva Astahovska), Riga; Art History Institute (curator Mari Laanemets), Tallinn; and the National Gallery of Art (curator Dovile Tumpytė), Vilnius.

The research project “Parallel Chronologies” was launched by tranzit.hu to map, study, and generate curatorial and artistic practices and methodologies dealing with postwar Eastern European art exhibitions and events between the 1960s and 1980s. Our goal is to present an international network of professional relationships, documents of exhibitions, events, and art spaces instead of the mere display of artworks from the period. We also attempt to propose a methodology with which documents and factual information as well as legends and cults can be researched, processed and displayed in an exhibition.
Creating our own chronologies we looked at why some events, works, figures gain significance as soon as they appear, making them the starting points of anecdotes and legends, while others are quickly forgotten or can only become significant when seen from a later context. We were interested to find out what roles and possibilities for public appearance the era’s political and social climate provided for progressive art, as well as what connections it had with “official art” and international trends.

The project "Other" Revolutionary Traditions by Sándor Hornyik deals with the history of cults developed around some revolutionary figures of art and history. He investigates how Hungarian neo-avant-garde artists appropriated or undermined the heroes and strategies of official cultural politics in the 60s and 70s and how contemporary artists in turn appropriate and deconstruct the cult of avant-garde and neo-avant-garde figures. How art becomes public by Dóra Hegyi and Zsuzsa László is an attempt to draw up a chronology of exhibitions and events that in the 60s and 70s redefined the relation between art and the public. We present the textual and visual documents of 16 legendary events from Hungary between 1966 and 1977. Through these case-studies we investigate how innovative models were introduced into exhibition-making, what kind of alternative presentational formats were developed, and how legendary events were preserved and revisited in the collective memory of the Hungarian art scene.
Both projects are presented in a documentary format. "Other" revolutionary traditions is exhibited as a series of A1 posters including contemporary art projects, and documentary materials accompanied by multiples and films. How art becomes public is displaying on tables: texts, facsimiles, photos -reproduced as pages of a newspaper - as well as films that document 16 art events and exhibitions selected for the project.
For the occasion of the exhibition a catalogue is issued in newspaper format, which in addition to documents displayed also contains two essays written by the curators. The newspaper considers the immediacy with which events and artworks reflected on the daily reality of their time, and also attempts to restore the then missing public appeal of these progressive practices.

The exhibition is accompanied by the international conference "Recuperating the Invisible Past”. For more information visit the link bellow:
http://lcca.lv/en/recuperating-invisible/ 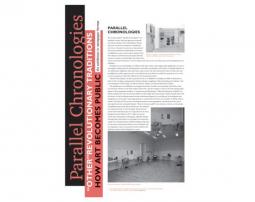