METASITU: Ecumenopolis – The Whole World Is One City

Free School for Art Theory and Practice
METASITU: A Walk In Ecumenopolis
A Performative Tour Of The Global City
Time: November 5, 2016, 6 pm to 8 pm

Ecumenopolis – The Whole World Is One City

The exhibition presents an overview of the research theme and activity of METASITU—a collective of urban research, art, and curatorial practices—on unearthing how the intricately intertwined and frequently hidden networks of global neoliberal capital and nationalistic agendas shape the world around us and, at the same time, how we inhabit and use these very structures, often unconsciously. The group departs from the concept of Ecumenopolis, a term coined in 1967 by the Greek post-war architect Constantinos Apostolou Doxiadis, which was a utopian idea that the world's cities in the future would form together into one total city. As a step further, the collective postulates that the spatial manifestation of power mechanisms is the most discernable in urbanization processes: a transformation of the urban realm into an all-encompassing layer of our contemporary reality worldwide. METASITU labels this process and condition “Ecumenopolis,” which also asks to rethink the core definition of what urbanism is. The video essays displayed in the exhibition, which are the outcomes of METASITU’s speculative, on-the ground detective work, are localized case studies of Ecumenopolis: among others, from the shrinking city of Mariupol, to a stone quarry near Hebron, or imperialistic state ambitions in Moscow.

Ecumenopolis – The Whole World Is One City at tranzit.hu Budapest is the fist major solo show of METASITU and their research activities, both ongoing since 2014.

METASITU is a collective for developing future urban strategies, founded in 2014 by Eduardo Cassina, an architect and urban sociologist trained in the United Kingdom, South Africa, The Netherlands, and China and Liva Dudareva, a landscape architect trained in Latvia, Sweden, and Scotland. Since METASITU’s conception Ecumenopolis—the idea that the whole world is one continuous city— has been the group's underlying conceptual framework and the main drive for their projects: a range of tactics that challenge traditional ideas and definitions of “the urban condition.” While in the beginning, the duo was nomadic, since 2015, their base is in Athens. Shape-shifting and the tactical use of transdisciplinarity are key to the modus operandi of METASITU: depending on the particular context they are in, they are equally engaged with the practices of an urban researcher, an artist, a curator, and an educator, while being neither of them by occupation.

Speaking Through Art is a series of solo exhibitions and events at tranzit.hu Budapest that presents collectives and individuals whose praxis is based on research and activities in various disciplines (architecture, design, ecology, etc.), the outcomes of which, however, are communicated and realized also through the field of contemporary art. Each solo exhibition has a different theme that relates to and delineates the participants’ research/activity area. The series as a whole interrogates the translation of research through art and the uses of art as unique terrain of mediation, learning, and transdisciplinarity, as well as the art world as a tactical medium, among others, for funding and travel opportunities. METASITU’s project Ecumenopolis – The Whole World Is One City is the first to be realized in this series. 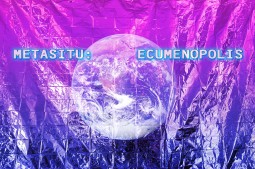