The book is published in relation to the exhibition 1971 – Parallel Nonsychronism, a joint exhibition of Kiscell Museum – Municipal Gallery and tranzit.hu, which examined the parallel tendencies of art in state socialist Hungary, during the so-called Kádár era (1957–1989) The exhibition presented two micro-histories, two contemporaneous bodies of artworks that were made around 1971. One of the groups comprises works by artists who adapted to the demands of Socialist Realism in the 1950s, and were able to modernize their art following the thaw of cultural policy after 1956. (Endre Domanovszky, Gyula Hincz, József Somogyi, Imre Kerényi). The other belongs to a new generation of avant-garde artists and to the formation of the underground scene that was underway during these years. The Imagination project by László Beke gathered the members of the generation who started their artistic careers in the 1960s, and who made many unsuccessful attempts to exhibit their works—that were continuing and renewing avant-garde traditions—in state-supported art institutions. Consequently, this young generation established their own parallel infrastructure for the exhibitions of artworks, one of which was Beke’s project. 1971 – Parallel Nonsychronism presented the complex relationship of these two generations, the simultaneously existing yet antithetical concepts of art. The chronology in the exhibition linked the two micro-histories by foregrounding the cultural policies between 1968 and 1973 as well as the art historical context of the exhibited artworks. The installation of contemporary artist Tamás Kaszás, commissioned for this exhibition, interpreted the bodies of artworks in relation to various historical and contemporary contexts.

In the catalog of the 1971 – Parallel Nonsychronism, the essays by the curators of the exhibition—Dóra Hegyi, Zsuzsa László, Zsóka Leposa, Enikő Róka, László Százados—and by invited authors, offer a comprehensive view of the parallel phenomena of the era, the development of artistic discourse. In accordance with to the structure of the exhibition, the volume also contains rich image and documentation materials. 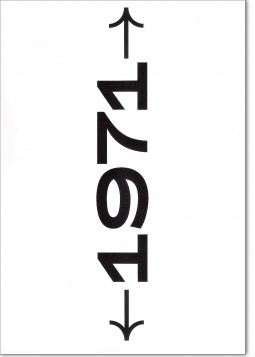