Tamás Király (1952 – 2013) emerged at the beginning of the 1980s with his cutting-edge fashion performances in the underground art scene of Budapest. The counter-fashion designer, mixing fashion with the elements of fine arts and theatre, also gained his first international success during this decade. Prominent fashion magazines, such as i-D and Vogue, reported about his geometric and classical design that was typical for the collection he created in 1988. One year before the fall of the iron curtain, Király organized the show around the motto “Open Doors” in Berlin, where he was the only designer representing the Eastern Bloc among such noted avant-garde fashion designers as Vivienne Westwood and Claudia Skoda.

Long before the journalist of the German Stern magazine described him as the pope of fashion in 1990, Király had already been dressing the underground artists of his time from his “punk boutique,” the New Art Studio, renowned for its moving displays. Furthermore, he also designed costumes for the films by János Xantus, Gábor Bachman, and Gábor Bódy. He staged his fashion performances of unwearable garments in the Music Hall Petőfi Csarnok, accompanied by Hungarian new wave music bands, such as the URH, Kontroll Csoport, and Sziámi.

The exhibition by tranzit.hu focuses on the first decade of Király’s work and, thus, opens up new interpretations about his oeuvre that has not been researched so far. The objects and documents exhibited recall the last few years of the Socialist era, when artists in opposition to the state system still congregated in the Young Artist’s Club. At the same time, nobody blinked an eye at someone wearing a hat modeled after the dome of the Hungarian Parliament with the emblematic red star.

The exhibition was kindly supported by Dávid Király.

The exhibition is realized in the framework of the Budapest Design Week 2014.

Image: Tamás Király with his model, with the Hungarian Parliament in the background, 1989 | Photo by Jonathan Csaba Almási 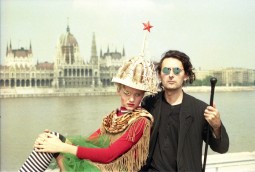