The Crocus Project – With Flowers Against Violence

In 2020, Space of Opportunity joined the international Crocus Project, which includes planting yellow crocus bulbs with young people “in memory of the 1.5 million Jewish children who perished in the Holocaust and the thousands of other children who were victims of Nazi atrocities.” The initiative was started in Ireland in 2006 and has spread to 12 European countries. In Hungary, Szembenézés Foundation has been the host of the initiative since 2016, under the title With Flowers Against Violence. The foundation has carried out the project, and additional educational activities, in several schools throughout the country.

"The yellow flowers recall the yellow Stars of David that Jews were forced to wear under Nazi rule. The Crocus blooms around the end of January, about the time of international Holocaust Memorial Day (27 January). While people admire the flowers, the pupils explain what they represent and remember the children who perished during the Holocaust. Participating in The Crocus Project is a tangible way to introduce young people to the subject of the Holocaust and to raise awareness about the dangers of racism and discrimination. The children’s involvement in learning about the Holocaust, in planting the bulbs and watching the flowers grow, encourages learning about tolerance and respect.” (Crocus Project)

We joined the initiative because it represents respect and diversity. We believe that we can successfully overcome racism with tolerance and solidarity. In 2020, we decided that Space of Opportunity would call neighboring secondary schools to join the event. One year ago, we facilitated discussions among the students, this year, students in the 11th grade at the Klára Leövey Highschool (collaborating teacher: Krisztina Jéga-Szabó) invited the other students to discuss their position on tolerance and respect based on a questionnaire, which they prepared in a workshop before. This year, students in the 9th grade at the BGSZC István Széchényi Commercial Technical School and students in the 12th and 13th grade at the Budapest Mechanical Vocational Center’s Kálmán Szily Technical School and College took part in the program.

Program:
15.00-15.30 Planting crocus bulbs at Molnár Ferenc square’s park
15.45-17.00 Debate on tolerance and respect at Space of
Opportunity, facilitated by the pupils in the 11th grade at Klára Leövey
highschool.

The event organized by Space of Opportunity is realized in cooperation with the students of Klára Leövey high school. 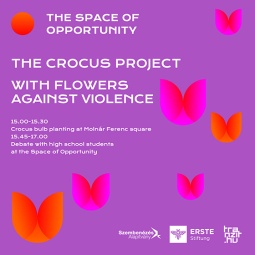