The exhibition was on view on appointment between November 9-14, 2022.

The artist talk took place in Spanish with English translation on November 14, between 6-8 pm.

Requer (Renier Quer) is the current resident artist in the artist exchange program between Artista X Artista (Havana) and tranzit.hu (Budapest), which started in 2020. Three Hungarian and three Cuban artists has been selected in an open call to spend time on Havana or Budapest. Requer spends four weeks in Budapest in October/November 2022.

Requer was born in Havana, Cuba in 1983. He graduated from the Visual Arts of San Alejandro in 2004 and from the Higher Institute of Art (Art of Conduct) in 2008. His practice includes different formats in cinema, art using communist iconography. The artist's works are invisible tunnels in some of the emblematic moments of history. He digs into totalitarian symbology as a remnant of a world that disappeared in geopolitics but whose splinters still impact us in the form of art. Requer's works are visual essays that function as prologues for what we are today. Hence the use of the storyboard, the plan or the sketch as supporting media to bring stories hidden in History to light, imaginaries buried under the images, or life, where, until now, only representation existed.

The pop-up exhibition will present three works of the artist.
The Art of October (2015) is a dramatic trilogy inspired by the film October, directed by Sergei M. Eisenstein in 1927, an epic work that reproduces and pays homage to the events that took place during the Bolshevik Revolution of October 1917. The trilogy is composed of three parts; the first, Three Severed Heads, is a sculptural ensemble constructed from photograms that synthesize a scene from the film; the second, a selective storyboard, and finally, Before or After, an installation based on objects that appeared in the film and that work as its material antecedent and its vestige.

In Práter 63, a selection of the storyboards will be on view. The meticulous selection of scenes recreate characters that are asleep, inactive or in a state of shock. These scenes have not undergone any chronological alteration with respect to the film, except for the final drawing, which corresponds to the first scene of the film where a large statue of Tsar Alexander III appears. The resulting narrative contrasts with the epic character of the film.

The artists’ book, The Days of Duel is from the year 2016, when Fidel Castro died. It includes a selection of drawings which were born during the nine days of official mourning of the former president. The work is a selection of drawings following the tradition of the Society Pages in newspapers. The dialogue with the official Cuban press and the archival aesthetics, attempts to become an institutional workers' mural: an object that is often used as an information board for the workers in the socialist enterprise.

The work Euphoria on the Editor’s Table from 2019 and functions as a possible editorial layout of a defunct magazine. It consists of a series of drawings in which events, texts and images from political magazines -fictionalized beforehand according to ideology- coexist, in a desire for the fantastic, with no apparent guidelines. The extinct social-economic model and its editorial universe become a platform for new stories that use the same protagonists and locations, a model for a publication of chaos.

He has made several storyboards for Cinema and the comic Bim Bom (with script by Arturo Infante), published by Diábolo Ediciones, Madrid, Spain in 2011. 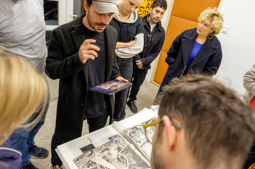