The project as methodology - seminar with Antoni Muntadas

Antoni Muntadas was born in Barcelona, Spain in 1942, has lived and worked in New York since 1971. His work addresses social, political and communication issues, the relationship between public and private space within social frameworks. He investigates channels of information and how these channels are used for cenzoring thoughts or for disseminating them. He works in different media such as photography, video, publications, internet and multi-media installations. His works have been exhibited throughout the world, including the Venice Biennale, Documenta Vl and X in Kassel, the Sao Paulo Biennal, la Biennale de Lyon et La Havana and The Museum of Modern Art in New York, the Berkeley Art Museum in California, the Wexner Arts Center in Columbus, Ohio, le Musée d´Art Contemporain de Montréal, le Capc de Bordeaux, France, the Museu de Arte Moderna de Rio de Janeiro in Brazil, the Ludwig Museum in Budapest, Hungary and the Museo Nacional Centro de Arte Reina Sofia in Madrid, Spain. His artworks can be found in the most prestigious collections of the world. Muntadas has taught and directed seminars in numerous institutions, currently he is teaching at Visual Arts Program in the School of Architecture at the MIT, Cambridge USA and at Instituto Universitario de Arquitectura del Veneto, Venice.

The seminar explores the methodology of a project as a personal but also systematic creative process of work through the questions: who? what? why? how? where? when? and for who?
The projects presented in the seminar serve as case studies.

To take part in the seminar, please send a motivation letter to the office@tranzitinfo.hu address until December 7.
Participation in the seminar is free. 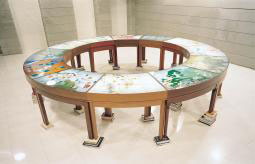