Contemporary cultural products circulate in a wildly global art circuit with multiple and idiosyncratic centers and peripheries. Meanwhile, cultural products and the discourses surrounding them are deeply entangled in unraveling histories of modernism and postcoloniality which inevitably inform cultural practices. The effects of this system on the way that art is produced and perceived has generated new pragmatic and theoretical strategies that artists and cultural operators employ to navigate a complex and demanding landscape, most particularly in mega-cities, where social, political and economic conditions are compounded.

What are some of the strategies of artists, curators and institutions operating within this intense, conflict-driven and changing climate? How does context contribute to meaning without falling into the trap of cultural specificity and stereotypical representations of cultural exchange and identity politics? What does it mean to curate in complex urban situations where power relations are negotiated within social, economic and political entities, such as the media, public spaces, and informal economies.

This chapter of the series of Tranzit seminars attempts to address some of these questions through the investigation of the curatorial projects by HamzaMolnar, revisiting notions of glocality, power relations, survival strategies, and their manifestations in our daily life.

Edit Molnár is a freelance curator and critic working between Budapest and Berlin.

Edit Molnár earned a MA in Art History in 1998 and a MA in Aesthetics in 2005 from Eötvös Lóránd University, Budapest. In 2002 she participated in De Appel´s curatorial training program in Amsterdam. From 2000-2005 she was the director of the Studio Gallery Budapest, a non-profit exhibition space of the Studio of Young Artists Association that focuses on progressive, emerging artists, and establishing and fostering connections with foreign partner institutions. She worked as a curator of the Műcsarnok/Kunsthalle, Budapest from 2005 to 2007.
She had been the director of the Cairo based independent non for profit art institution, the Contemporary Image Collective between 2007-2009.
Molnár has given lectures on contemporary art at the Neue Berliner Kunstverein, Berlin; The Townhouse Galley, Cairo; ACAF Alexandria and from 2009 February she is a visiting lecturer of the curatorial course on the University of Fine Arts, Budapest.

Her recent projects include co-curating the exhibitions/projects: On Mobility in Amsterdam/Berlin/Vilnius/Budapest (2006); Dreamlands Burn at Mucsarnok/Kunsthalle (2006-07); co-curating Tales around the Pavement, Chapter 1-2, Cairo: She co-curated Indicated by Signs at the Bonner Kunstverein, Bonn and New Entries_PhotoCairo, an exhibition and seminar, Museet for Fotokunst, Odense (2009)


Born in 1975, Aleya Hamza completed her MA in Visual Culture at Goldsmiths College, London (2001), and her BA in Political Science at the American University in Cairo (1997). She worked as a curator at the Contemporary Image Collective – CiC, Cairo (2006-2009) and as an associate curator at the Townhouse Gallery, Cairo (2003-2005). In 2006 she received the ifa Rave Scholarship to work as a curatorial assistant in the artistic office of the 4th Berlin Biennale and she periodically writes/lectures about contemporary arts practices in Egypt and internationally. She co-curated Indicated by Signs at the Bonner Kunstverein,
Bonn; New Entries_PhotoCairo, an exhibition and seminar, Museet for Fotokunst, Odense (2009), PhotoCairo3: Image Statement Position, Townhouse Gallery and CiC (2005). She is part of the curatorial collective HamzaMolnar, with Edit Molnar with whom she has co-curated multiple projects, and is currently a Cairo-based independent curator. 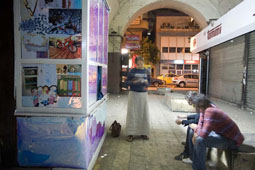