Re-thinking Methods and Objects of Exhibitions - Tangenting Conventions of Biennials

To participate in the seminar, please send a motivation letter in English until January 21, 2013 at office@tranzitinfo.hu.

Curatorial methodologies are drawn from practice; shaped by both pragmatic and empirical knowledge, as well as philosophical and linguistic investigations. The curatorial research, as investigation in any context, creates a relation to geographical and cultural elements. The process of production, both supporting the creation of art works and then forms of exhibitions, is thus a response to the context and the venue. The (biennial) curator always circles questions of how to create across discourse, geography and value, but also how to stay independent of the same. The issue of autonomy in rethinking art as part of human science, and as an object of experience, leads us to consider the artwork as central in what can be invested in an “exhibition project”. Curatorial method, as we understand it, is closely connected to self-organisation – an interdependent relation between the self and an organised community within society. One question could be: How is this interdependency navigated within a biennial context? The curator’s relations to the organisation/institution have to create possibilities for the space for the artistic project, and work in the juncture between the political and the creative. When the contribution to the process from the political is in deficit, the artist and the curator invent and invest “alternative” methodologies. We propose this as a starting point for discussions to explore the curatorial work of biennial exhibitions.

Abdellah Karroum is researcher and curator. He Founded L’appartement 22 in Rabat in 2002, and has developed numerous projects including Editions Hors’champs in Bordeaux, and artistic expeditions Le Bout Du Monde (Rif and elsewhere). He has served as curator for the Biennales of Dakar 2006, Gwangju 2008, and Marrakech 2009. He initiated The “Curatorial Delegation” and the research laboratory “Art, Technology and Ecology.” Karroum is co-curator of the 3rd edition of La Triennale at Palais de Tokyo in Paris in 2012. He is the Artistic Director of the Biennale Bénin 2012. 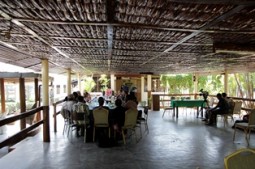