The Beginning of Hungarian Conceptual Art. The László Beke Collection, 1971

In August 1971, László Beke—the renowned Hungarian art historian and curator of several progressive art events of the 1970s—sent out a call to 28 artists, asking them to submit sheets that would fit into A4 document folders, following the concept: WORK = the DOCUMENTATION OF THE IMAGINATION/IDEA. Beke arranged and preserved the sheets he received in folders, but for most of the last forty years they have not been available for viewing to a wide audience, and they have rarely appeared in exhibitions. It is only in the last five or six years that, due to a renewed interest in the collection, IMAGINATION has been featured in several exhibitions, both in Hungary and internationally, as well as being presented as a publication in itself. A comprehensive selection of these important documents of Conceptual art is now published as facsimiles with English translations, alongside László Beke’s essay describing the context of the project and biographical information about the participants. 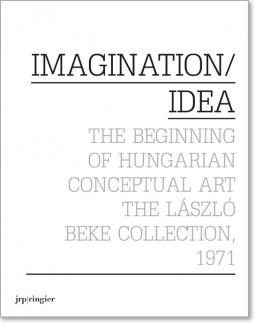