Roger M. Buergel: Curatorial subjects and methods. From The Government to documenta 12

The title of the latest exhibition-series of Roger M. Buergel and Ruth Noack was The Government, in reference to a text by Michel Foucault about gouvernmentality. Starting from Foucault´s text, the exhibition series explored the issue of how we should govern ourselves, and how others should govern us. Buergel and Noack´s choice is given actuality by the advance of neo-liberal economic thinking and the market orientation of knowledge and culture. In his thinking about gouvernmentality, Foucault does not simply examine methods of rule. In his analysis of the complex relationship between power and subject, he shows that the aim of governance lies not in itself but in those being governed. How can one participate in controlling the processes? What forms can resistance take? How can creative answers be given in crisis situations? The 2007 documenta will doubtless continue to address these issues.
The aim of the programme is partly to generate a critical context that involves those active in the contemporary art field, and partly to intermediate between the professional audience and the management of the next documenta, as well as between the contemporary art scene and intellectuals working in the area of social criticism in Hungary.
The program was supported by:
Austrian Cultural Forum, Budapest
Goethe-Institut, Budapest
OSA Archive 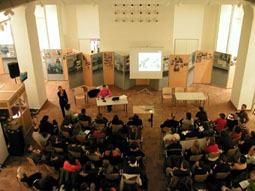