Periferic was initiated by artist Matei Bejenaru as a performance festival in 1997 in Iasi, in North-Eastern Romania and functions as an international contemporary art biennial since 2001.
Periferic aims to continuously rethink the centre-periphery relationship and the conditions for art production in marginal cultural contexts through presenting different artistic positions and theoretical discussions.
The concept of Periferic 8: Art as gift will be presented.

The presentation will be followed by a screenig:
Matei Bejenaru: Maersk Dubai (7,30’), 2007
"In the spring of 1996, three young people from Romania were thrown overboard the Taiwanese ship Maersk Dubai for being stowaways who had embarked illegally in order to cross the Atlantic and get to Canada. I learnt the news of the death of the three Romanian young people on TV. It took me ten years to finally realize that their tragedy is a symbol of Romania as it was during the nineties, a devastated country striving to leave the communist dictatorship behind."


Stefan Constantinescu: El Pasaje (The Passage) (62’), 2005, Stockholm
El Pasaje is a story of three Chileans who were forced to leave Chile after the Pinochet controlled coup d´etat of 1973. All three ended up living in Nicolae Ceausesc´s communist Romania, which corresponded to their ideals, and over time, two of them left for Sweden. El Pasaje is a film about refugees, strangers, the past, prejudices and loneliness.

Matei Bejenaru is an artist and initiator of Periferic Biennial in Iasi, Romania (www.periferic.org). Together with a group of artists and philosophers from Iasi, he founded in 2001 the Vector Association, which organizes exhibitions and publishes Vector - art and culture in context magazine.

Stefan Constantinescu (born 1968, Bucharest) studied at the Royal Art
Academy of Stockholm, where he ceived his MFA in 1997. His activity includes
many group and individual exhibitions in Germany, Italy, Denmark, Lithuania,
Switzerland, Sweden and Romania. His major interest in recent years was
focused on video-film.

On May 31 and June 1 Matei Bejenaru, Simona Nastac, Catalin Gheorghe and Vlad Morariu will give a seminar in the framework of the Free School for Art Theory and Practice on the contemporary Romanian art.
Special thanks to d24 Dóra Fónagy Architecture Office for providing a location for the seminar. 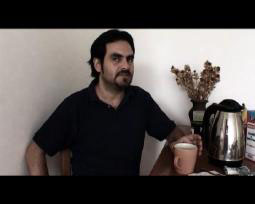