In conversation with: Zsuzsa László Emese Süvecz (tranzit .hu),
Visuals : AMPBA (Association of Mouth and Brain Painters of the World)


Tranzit .hu has launched a series of talks in its new space, KIRÁLY102. By creating a dialogue between the representatives of different countries, disciplines and generations, we wish to realize a community space where curatorial approach and artistic thinking can serve the discussion of current public issues and the articulation of community-forming statements.

The theme of the first year is the political transition of '89, the role of intellectuals and artistic thinking in the dissident or alternative social movements from the crisis perspective of the 2010s.
The framework of this programme is a long-term international collaboration that intends to explore interconnections between the post-communist and post-colonial discourses.

For this second event, we will tackle again some topics raised during the previous discussion, such as the idiosyncratic role of the intellectuals in Eastern European societies. Through case studies we will recall and discuss the crisis of the 1968-intellectuals’ role and the contradictions of the transition from state-capitalism to global capitalism in correspondence with the still open economic, ideological, artistic debates of the regime change. One of our starting points that connect all these themes is the legendary sociological study by György Konrád and Iván Szelényi, titled “The Intellectuals on the Road to Class Power,” which could only be published officially in Hungary with the regime change, 15 years after its completion, and since then, it has been reinterpreted many times.

During this event, with the collaboration of the AMBPA (Association of Mouth and Brain Painters of the World) we will change the name of the our place from KIRÁLY [king] 102 to MAYAKOVSKY 102, in order to express our commitment to face and critically examine the heritage of the regime change and that of the preceding decades. 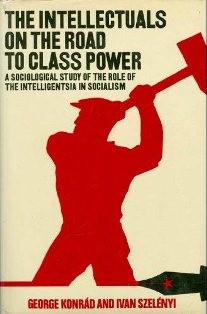