The film is screened using the original 16mm roll after János Sugár’s introduction. The screening is followed by a talk, documents of the film and the exhibition featured in it can be viewed during the evening.

The theme of the series is the political transition of 1989, the role of intellectuals and artistic thinking in the dissident or alternative social movements from the crisis perspective of the 2010s. Persian Walk recorded the economic -scientific news and prognoses, as well as the cityscape of Budapest in the years preceding the political transition from a projected future point of view, which are still unfulfilled the same way as the hopes and expectations of the 1980s are recurrently restated.

The title of the film, Persian Walk, alludes to Montesquieu’s Persian Letters, the book in which contemporary French reality is seen through the eyes of a loyal stranger, a Persian prince. The film is about the possibilities of perceiving or seeing our own age, our own contemporary reality. We fail to see or notice things that would stick out for our later selves, for those we are today.

It’s a so-called experimental film, although I prefer to use the category of cognitive film. Its structure is very simple: two people are walking and talking to each other. But this is an actual walk, in “real time”, down the streets of 1985 downtown Budapest. For their dialogue I took excerpts from current articles on economic news, forecasts, trends that had appeared in a weekly newsmagazine. Above this dialogue there is a second sound layer, a strange music: two singers (a man and a woman) making remarks on what we see or hear on the screen, two voices from the future watching an old movie.

I was fascinated by how people watch old feature films: beside the actual story, they seem to draw great pleasure from their documentary value, the fact that they provide ample reference on the old times, they watch the streets, the shops, the people, the clothes, etc.

Now in the middle of the film, both geographically and temporally, there is a gallery which the two guys enter, walk around, and then leave, and say absolutely nothing. The exhibition space I chose was at that time the best in Budapest. It was in a very nice location, they had very good exhibits but it was totally official. It was the kind of place in which I, as an unknown, underground, avant-garde young artist, could never dream of being able to exhibit. But since I was making a film that had been approved by an officially sanctioned film studio, I asked for the gallery space to be put at my disposal for the production of the film. So I was given, for free, this space for three days, and I have made the exhibition which is seen in the film. 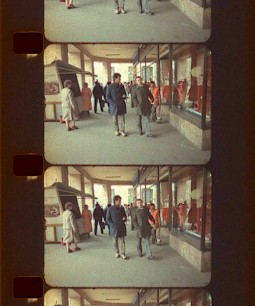