tranzit.hu presents: Art in Eastern Europe from 1945-1989; Limits of Official and Unofficial

Public lecture of Tomáš Pospiszyl in the framework of Patterns Lectures

PATTERNS Lectures – a programme initiated by ERSTE Foundation – encourages the development of new university courses in the fields of art history, cultural theory, and cultural studies in Central and South Eastern Europe. The Patterns-course The Inheritance and Transformation of Socialist Realist Forms of Expression in Hungarian Contemporary Art – A Comparative-critical Survey held at the Hungarian University of Fine Arts, Department of Art Theory and Curatorial Studies, aims to provide an insight into the history of socialist realism, to give an overview of the cultural and visual paradigms and to also focus on the contemporary phenomenon. Anja Jackes is the first guest-lecturer of the course, her open lecture will take place within the framework of Patterns Lectures.

The course is led by Edina Nagy

Tomáš Pospiszyl (*1967) is a Czech critic, curator and art historian. He studied at Charles University in Prague and Bard College in New York. He worked as a curator at The National Gallery in Prague (1997-2002), and was a research fellow at The Museum of Modern Art in New York (2000). Since 2003 he teaches Art History at the Film and TV School of the Academy of Performing Arts in Prague and since 2012 at the Academy of Fine Arts in Prague. Projects realized by Tomas Pospiszyl range from the period of early modernism, mid-20th century avant-garde to contemporary art. He is particularly interested in popular culture (book Octobriana and Russian Underground, 2004, book and exhibition Planet Eden, 2010) and art created during the Cold War on both sides of the Iron Curtain (collection of essays Comparative Studies, 2005). He serves as a board member of tranzit.cz, an art initiative in the Czech Republic, for which he prepared exhibitions, lectures and public programs, currently the performative exhibition Július Koller Archive: Study Room. His publications in English include the anthology Primary Documents: A Sourcebook for Eastern and Central European Art since the 1950s, which he edited together with Laura Hoptman, (MIT Press, MoMA, 2002).

Art in Eastern Europe from 1945-1989; Limits of Official and Unofficial.

Histories of Eastern European art between 1945 and 1989 often work with the dichotomy of official and un-official culture. Such division clearly existed, but the exact definition of officialdom and un-officialdom is quite elusive. Both spheres were referencing each other and their borders depended on the specific context. It is believed that this dichotomy was discontinued right after 1989, granting the un-official culture full victory and rehabilitation. A closer look reveals that on the institutional level many artist-run spaces operate on similar basis as before 1989. And the core of some of the 1970s and 1980s un-official art activities is unimaginable without the aforementioned dichotomy. It was rather a community-creating activity, where art production was almost a by-product of social goals. Examples include Czech artist Jiří Kovanda, the Russian group Collective Actions and Slovakian artist Július Koller. 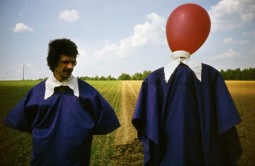