Where Has Communism Gone? Performance: March 1, 2013

The Budapest adaptation of the play by artist group Chto Delat?

Artist group Chto Delat? from St. Petersburg has been invited by tranzit. hu to Budapest to realize a stage event, employing the Learning Play method of Bertolt Brecht, based on the participants’ own experiences.

Where has Communism gone? This question refers, firstly, to Russian revolutionary writer Andrey Platonov. It was the hero of this novel “Chevengur”, who, suddenly getting awakened in the middle of the night after his dream is asking where socialism is and searching for it as if it were an object, a thing which supposedly belonged to him. By posing the question about communism, we aim to explore the nature of this political desire, which, in spite of the fall of what they call “real socialism” or “communist regimes”, is still persistent, at least on the field of contemporary theory and arts.

They say that communism was a utopian project, which ended up badly, with violence and totalitarianism, and that the only thing we can do now is to forget any hope for a better future for the whole society, to focus on our individual lives, to enjoy this eternal present – to use our possibilities and skills in order to succeed in walking up a money pyramid trampling the heads of others.

However, today after decades of excessive ideological overproduction of the monstrosity of communism, a general anti-communist phobia has ended in a new disappointment. The liberal utopia, based on the notion of free individuals freely operating in a free market, was demolished by the intervention of the real of the global economic, political and ecological crisis. In this perspective, all the debates about communism, not only as an experience of the past, but also as an alternative for the future, became valuable and actual again.

The ghost of communism is still wandering around, and to transform it to a commodity-form seems as a good way to finally get rid of it. Conferences and artistic events dedicated to the idea of communism are going on one after another. But beyond this exhausting machinery of actualization and commodification, we still have as a potentiality this totally new desire of communism – the desire which cannot but be shared, since it keeps in itself a “common” of communism, a claim for togetherness.

The learning play to be staged is formed by the discussions of these issues and thorough the experiences of being together. 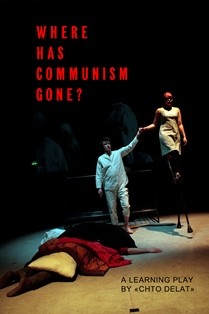 Related
Call for participation - Where has Communism Gone?