tranzit. hu, besides its action day series—initiated in reaction to the current cultural-political situation in Hungary—organizes in the fall of 2013 two professional-communal events. During the first event, three projects will be discussed whose common denominator is that the organizers of the respective projects envisioned the participants to build a community.

Between the discussions, kalimba music and food by ÁmeN TSz

As part of the previous event of FORMER WEST, Documents, Constellations, Prospects, in March at the Haus der Kulturen der Welt, Berlin, the one-week long workshop LEARNING PLACE (conceptualized by Boris Buden) was devised as an educational platform for students across the world. Participants of the LEARNING PLACE program, and recipients of the tranzit.hu FORMER WEST scholarship, Emese Mucsi and Gyula Muskovics share their experiences.

tranzit. hu participated for the third time at the Bánkitó (Lake Bánk) Festival, in Bánk, in the North of Hungary. For the festival, we organized, together with the artist group PR group, and many other volunteers, the collective screening of Peter Watkins’s La Commune (Paris, 1871). The film, which reworked and reenacted with 200 volunteers the story of the 1871 Paris Commune, is proposed to be viewed as community cinema event by the director himself. We talk with the participants running the project in Bánk whether the screening and a filmic reenactment of a collective experiment can bring about the formation of a community.

The third topic of the event will be the summer summit of the Hungarian Two-tailed Dog Party (MKKP). We are interested in the ways through which a street art project with absurd and critical messages was formed into a political party which will run in the upcoming elections in Hungary. Sociologist and civil right activist Bálint Misetics talks with party founder Gergő Kovács. 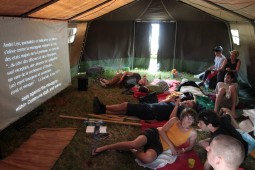