During the November event we will touch upon issues, such as the new law conerning Musuems in Hungary, and art scene's response to it. 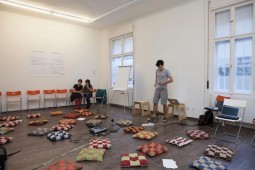