tranzit. hu at the Quarter6Quarter7 Festival: Culture in Socialism—Beyond Retro and Terror?

The two volumes of studies, published in 2013, explore the cultural significance of the socialist period. The books are presented in English, keeping in mind the interest of foreigners living in Hungary in the topic.


The monograph by cultural historian Beáta Hock critically re-examines the supposed absences and presences of feminist cultural practices in Hungary, with a focus on fine arts and cinema. The gendered dimensions of art production are explored in relation to larger social and cultural contexts, in order to offer a uniquely interdisciplinary account.

Short overview of the book:

The history of women’s art and gendered cultural practices has had a troubled record in Hungary, as in many countries of East-Central Europe, and it mostly features as a missing phenomenon. This “lack” is often attributed, on the one hand, to state-socialist government policies that "emancipated” women at the same time as they hindered grass-roots social movements, including feminism; on the other hand, to a re-traditionalizing social environment after the political changes of 1989.

About the author: Beáta Hock is Research Fellow at the Leipzig Centre for the History and Culture of East Central Europe. She holds a PhD in Comparative Gender Studies; her research areas include visual culture, feminist cultural theory, cultural production and transnational artistic exchange under Cold War circumstances.

The studies published by sociologist and media researcher Ferenc Hammer focus on Hungary prior to the political change of 1989, exploring various phenomena from everyday culture, including the significance of wearing jeans and the rules of the board game IGazdálkodj okosan! [Economize your spending!], the Hungarian version of Monopoly adapted for the socialist system.

Short overview of the book:

Ferenc Hammer’s four studies play out in pre-democratic Hungary. Their key figures, though ordinary people like us, are younger and have a relationship to objects and ordinary days that is entirely different. The reasons for this are both cultural and political. On the one hand, life then operated on an entirely different internal mechanism: the concepts of workplace, study, community, and leisure time all meant different things. At the same time, the apparatus of political control inhibited the free flow of not only goods, but also experiences. And of course, during this period, people already encountered numerous objects, individuals, and situations—jeans, board games like Monopoly, and even truck drivers—that reminded them of the borders that defined them, and the opportunities they perceived as lying beyond.

In these studies, somewhere beyond the broader connections, tiny details grow sharper: the freedom and longing represented by a pair of jeans, the supportive—or critical—attitude toward the politico-economic system shown by a board game, the near mythical status of the men who crossed borders in their trucks, and the cultural attitude that bred opportunities for free, critical thinking and artistic expression within the Kádár regime. The period that is studied here extends from the 1950s until the 1990s. Through professional literature, interviews, and personal experiences, the reader is taken into the realm of the social sciences, where the terrain is no longer that of the museum and its collections of artefacts, but where the culture of ordinary objects nonetheless serves as a showcase for work-a-day life, one that illuminates the object-centere world of ordinary days, leisure time, and the process of consumption. (Excerpts from Zsófia Frazon’s introduction)

About the author: Ferenc Hammer holds a doctorate in sociology (2005). Teaches and conducts research in the fields of cultural sociology, media studies and history of Cold War. His research interests and methods are associated with practices, time-spaces, acts and objects of everyday life. 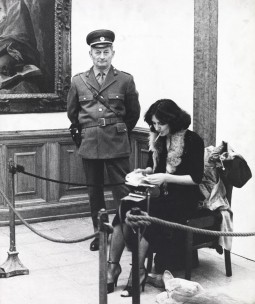