The December event is moderated by Máté Kerényi and Szabolcs KissPál 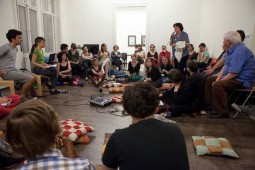