Book launch of Good Opinion by Igor and Ivan Buharov

The book is published and supported by tranzit. hu, ACB Gallery, and Galeria Arsenal (Białystok).

7 pm
Igor and Ivan Buharov: The price of memory, 2014, 11 min
The book will be introduced by Miklós Paizs (Sickratman)


The point of departure for the book by Igor and Ivan Buharov is their 2012 exhibition in Białystok, where they presented the film Rudderless extended in space, in the form of an installation.

The artist book includes a selection of images of the films by Igor and Ivan Buharov from 1995 to 2011, as well as drawings, paintings, photos, and found images. Texts are taken from the films, and there are also quotations—from texts by, among others, Mikhail Bakunin, Piotr Kropotkin, Ottó Tolnai, István Domonkos—which are significant for the artists.

If the experience of modernity is inextricably linked to being on the road, to break out of the present, then the Buharovs are real late modern—while in no way belated modernists—artists. In their films—which in their open gestures, also join ranks with / refer to the utopian art of the avant-garde—the desire for breaking out manifests itself in tormented yet dynamic exterior shifts and an interior trip through the transcendental. The film characters’ perpetual wanderings and fragments of their jumbled up quasi-metaphysical meanderings embody the two sides of the desire for escaping enclosed reality. But the Buharovs’ characters do not cross state borders with the unbearable lightness of being to rise to transcendental heights—like the heroes of the contemporary western world, who dash about in its network spaces—as the authors never forget—how could they?—an aspect of the Eastern European rooted reality, the provincial experience where the heaviness of the material world, existential poverty and cultural depravity drag one oppressively and fatally down to earth. Those who dwell here are enmeshed in a grotesque-poetic collage of post-socialist object culture (typical of the Buharovs’s imagery) and ruins of a post-industrial world of, which they unconsciously attempt to shed. They get the urge to escape to flee, run, and stuttering about presentiments of transcendence, they seek for something more—all the while wandering through the same worn out spaces for decades with increasingly ragged faces and bodies, or ending their flight from a threatening and humiliating provinciality in the lost identity of the gastarbeiter. The artist book’s images, film stills, graphics, and posters, only amplify the ever present angst that oozes from their films, roused in us by the humiliating methods of exercising political power in the post-communist region, and the general apocalyptic menace of scientific-political programs that are usually classified as military secrets, and something even more universal: the evil aspect of existence and the ever-lurking presence of death. The carnivalesque masks, the surreal games, the offsets and shifts so richly interwoven with humor rupture the fabric of everyday reality, tempering the depressing experience of spatial, temporal and physical limitations through the—perhaps not so—light ecstasy of freedom. Their works throw the gates open on infinity. 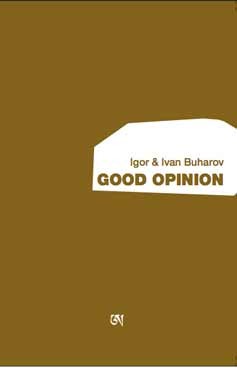