The discussion takes as its point of departure three artworks presented as a one-night exhibition that relates to the Holocaust memory and will examine how this trauma can be represented in contemporary art through the artists' personal positions. The pieces reveal the perspective of the successor generation of Hungarian majority society—who lived through the Holocaust not as victims but as outsiders or perpetrators. The discussion will also touch upon the similarities and differences in the Holocaust memory within a larger, Central-Eastern European context.

The event starts with a “guided tour," presenting the artworks by artists Hajnalka Tulisz, Lőrinc Borsos, and Marcell Esterházy.

The discussion will be in Hungarian.

The event is curated by Vera Simon

The event is part of the Negyed7Negyed8 Festival, a series of events during Pesach. 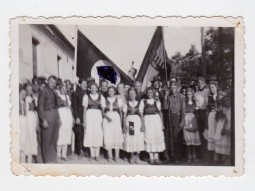