Second event: The Internationality of Solidarity

tranzit.hu launched a discussion series in September 2016 about potential tools for widening the social base of solidarity and collective acts. At the second event, we will look at how social solidarity connects to participation, and what kind of experiences serve as a base for the various solidarity movements and how they shape each other across borders.

Our point of departure is the environmental movement that, since the regime change of 1989, was the first one to build up a wider social basis and to encourage people and groups for active civic engagement. From the second half of the 1990s, the Hungarian alter-glob aspirations—connected to the base of the green movement, encompassing the critics of global capitalism—could define themselves from the very beginning as part of an international movement and of global civil society.

What are the connections between these movements? Are there juncture points between the “participatory revolution” in Western democracies, that turned away from high politics in the 1980-90s, and the civil consciousness slowly arising after the regime changes in Eastern Europe between 1989 and 1991? How have the various revolutions in the post-socialist region opposing half-authoritarian regimes of the last fifteen years influenced each other? How have the Arab spring or Occupy Wall Street shaped global civil society around the world? Can we believe in the formation of a collective public sphere that is able to fight for social justice around the world?

Zsolt Boda, political scientist, Director of the Institute of Political Science at Centre for Social Sciences of the Hungarian Academy of Sciences. His research themes include trust and political cooperation, governance, and public policy.

Szabina Kerényi, cultural anthropologist. In the early 2000s, she took part in several movements, since then she is reaching them. Her research field of interst include grassroots movement, post-socialist urban movements, community initiations.

Péter Krasztev, cultural anthropologists, literary historian. He is associate professor at the Media and Society Department at the University of Applied Sciences of the Budapest Business School. His Research interests include the social and cultural history Central and Eastern European in the 20th century , the social movements and the cultural and intellectual trends of the region.

Tibor Várnagy, artist, director of the non-profit Liget Gallery since 1983. 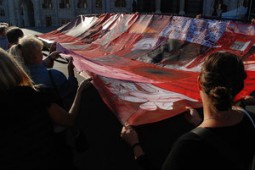