œuvre is on view until March 18, by appointment at office@tranzitinfo.hu

The book is presented by Beáta Hock, cultural historian

œuvre is on view until March 18, by appointment at office@tranzitinfo.hu.

The story of the book on the public art activity of János Sugár goes back to 2006, and even earlier, to 1993, to his Sztriptíz [Striptease] project. His plan to cast in bronze the graffiti Sztriptiz —spayed on the wall of a building in Budapest, most probably in the 1980s—was made first in 1993 for the exhibition Polyphony: Social Commentary in Contemporary Hungarian Art. After it fell through, Sugár’s Sztriptíz project was the winner of tranzit.hu’s open call Unrealized Art Projects in 2006. Yet, due again to the failed attempt to obtain the necessary permissions, the plan remained unrealized in the 2000s as well. After this, the idea of a book emerged that collects Sugár’s works and projects, which—similarly to Sztriptíz—are made primarily not for an art public but the urban, public space.

On the occasion of the book launch, János Sugár’s non-public art piece œuvre will also be exhibited at tranzit. hu, the story of which likewise goes back to several decades and turning points. Sugár first presented œuvre in 1986 at the Studio Gallery in Budapest, at an institution financially supported by the socialist state, but which brought together young artists. Sugár, at that time, worked outside such state-supported structures; however, when he was offered a solo show at the Studio Gallery, he took this opportunity to deliberately create something that is incompatible with the (then) present’s interpretive framework. That is, he wanted to create a piece in 1986, in and about the present, which, from the future, looks already past: an already existing evidence. That is why the young Sugár chose œuvre—as in retrospectively from the future—as the title of his exhibition.


This theoretical model, or rather the modeling of the meaning of an art work or of art itself—how can we create the art of the future already today?—is not only a conceptual endeavor. It was also imperative for Sugár to work out the two parts of the installation in the most accurate and most detailed way possible. On one hand, he keeps open the symbolic meanings of these two parts, as well as that of their relations (see the exhibited drawings): west-east, ephemeral-eternal, utopia-future, destiny-explanation, revolution, mirror, etc. On the other, he is attentive to materiality and sensitivity, as it is the physical realization (shape and surface) that manifests, interprets, and makes visible the abstract idea encompassing different time dimensions. To test the dimensions of past-present-future, as well as the current and changing context of the art work, Sugár decided already in 1986 that he would exhibit œuvre every ten years. In 1996 and 2006, the exhibition took place at the Studio Gallery, this time, in its most complete reconstruction, it will be on view at tranzit. hu until March 18, in conjunction with the launching of the 2016 book on the artist’s public art activity. 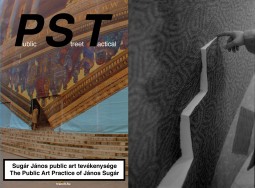