Propositions for a Pan-Peripheric Network

The new issue of the international online journal mezosfera.org, published by tranzit .hu, deals with the potentialities of regional collaborations that go beyond geographical positions.

In Hungary, a state socialist country for 40 years, the education of several generations included a state-directed solidarity with other leftist political systems around the world from Latin America, through Africa, the Arab world, and Asia, which also wished to fight imperialism. Hungary, as other former Warsaw Pact countries, has a strong European identity and also practiced cultural and scientific colonization, exporting technologies and knowledge, inviting “third-world” students to study in Eastern Europe. After the regime change in 1989, all sentiments connected to the former system and the friendships based on socialist internationalism were thrown out. Former Soviet satellite states rather connected themselves to decolonialist struggles interpreting their own previous historical subordinations as well as the Soviet political, economic, and cultural domination as a form of colonization.

The issue comprises essays examining possible (re-)interpretations of Eastern Europeanness and transregionalism, as well as interviews with members of various initiatives that likewise attempt to build up regionally committed working methods. The issue is contextualized with a temporary reading room that presents a selection of Hungarian publications on the independence movements of the “Third World,” and works by Tamás Kaszás connected to the concept of "pan periphery."

The project is realized as part of the OFF-Biennale Budapest.

Supported by: ERSTE Stiftung; FUGA, Budapest Center of Architecture
The research to this presentation and publication was partially sponsored by Közép-Európai Egyetem. 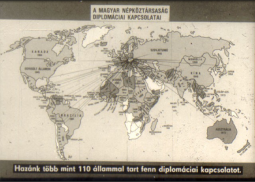