The participating artists are invited to discuss one of their artworks selected for this occiasion. The conversations series evokes a TV program of the 1980s in Hungarian state television, the so-called “Artwork of the Week,” as well as other similar art events that were organized by artists Little Warsaw and Miklós Erhardt in the early 2000s. 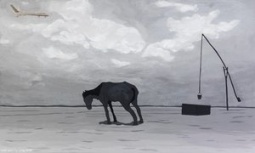