Over the course of 2019-2020, tranzit. hu launches the event series entitled Regime Changes, which, in the form of lectures, exhibitions, research presentations, thematic magazine issues, examines what real and symbolic changes arise from political turning points in a given era. How do views and narratives live on underneath the surface so as to emerge in a re-interpreted form as the dominant discourse of another regime? Case studies commissioned or adapted for the series present the shifting, often politically appropriated and contradictory interpretations of political, social, and cultural events of the past hundred years.

On November 15, 2019, the 6th part of the Pathos Management conversation series took place.

Pathos management is a non-existent concept created from the fusion of “pathos formula” and anger management. Thus, one of the sources of this ephemeral concept goes back to psychology and social psychology, and the other to art history, specifically to Aby Warburg’s work. Warburg, in one of his letters, described himself as a psycho-historian of culture, who examines how visual topoi expressing strong emotions, passions, and sufferings, the ecstatic and the tragic migrated from one historical-cultural era to another. As a modernization and updating of the iconological method, pathos management looks at how Hungarian visual culture has dealt with Hungarian regime changes over the past hundred years, how it related to the ideas and feelings these changes brought up, and how it has re-interpreted its own topoi and pathos formulas. On the one hand, the series examines which topoi, symbols, and allegories of Hungarian art have become once again current, and what happened to these topoi over the course of independent Hungary’s first century.

The friendly meeting of Miklós Horthy and James Joyce in a café does not miss historical credibility, as in some of the biographies of both Horthy and Joyce occures the anecdote that Joyce, who was teaching at Berlitz in Pula might have taught the young Horthy, who served at the Adriatic Fleet at the end of the early 1900s. The possibility of their relation was hitherto not strengthened by any concrete historical proof, we don’t know any document, photo, letter or diary note. Moreover the anecdote might serve to overwrite Horthy’s conservativism in political actions and his role in World War I, by emphasizing his talent for languages and with the figure of Joyce, who was committed to high culture and modernism. Csaba Nemes stresses the ideological load of the scenery in the café with placing alienation effects (evoking Brechtian, even more Warholian associations), a CBA milk box and a CBA can, products of a Hungarian food chain. The brand CBA --referring to state socialist times food chain ACB-- does not only shows the socialist roots of Hungarian capitalism (which Nemes pointed to in an earlier series ABC-CBA in 2006), but also to the protectionist economic policies of Hungary of the 2010s, as part of, the Hungarian oil company MOL, the largest Hungarian owned bank OTP and also CBA are expanding in the Adriatic region, concretely in Croatia. 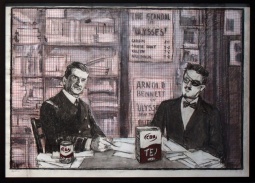