The work of the Hungarian artist duo is at least as surprising as the regular success of the local communist party. (Die Presse, Almuth Spiegler)

The Buharov brothers, Igor and Ivan Buharov (Kornél Szilágyi and Nándor Hevesi) are important figures of Hungarian independent and experimental cinema. In the last 20 years they have made a dozen distinctive films, low budget, but all the more influential. The artist duo has also achieved international success: they took part in several international film festivals and exhibitions, and in 2018 produced a large-scale new work for the Steirischer Herbst in Graz, one of Austria’s most important contemporary art festivals. Co-organized by tranzit.hu and Trafó House of Contemporary Arts, their project for Graz will now be shown in Budapest, adapted to a special site, the Center of the Vasas Federation of Metalworkers' Union in the 8th district (15 minutes walk from Trafó). The building was erected in 1928 and has been an important site of the workers’ movement in the last almost hundred years of its existence.

Titled Eternal Intentionfield Tuning, the artists created a site-specific multimedia performance-installation, which turned the headquarters of the Austrian Communist Party in Graz into a laboratory of the revolution-to-come, a mystical-scientific temple of both political and spiritual alternatives. Those who watched the last feature film by the Buharovs (Most of the souls that live here, 2016) attentively, already know that the revolution of animals has failed, so the artists now look to plants in a renewed revolutionary attempt, striving for broader social cooperation and interspecies exchange.

It is not by coincidence that the Buharovs chose plants as their allies for the coming revolution, as plants have the most widespread and interconnected networks of communication, offering alternative channels of information transfer in times, when data security seems to collapse and we, humans are increasingly subject to digital surveillance and control. Drawing on recent results of bioenergetics, electromagnetics and parasciences, the artists do all they can to make the long awaited revolution successful. They deploy obsidian mirrors used as tools of divination in Mesoamerican cultures and esoteric inventions such as the Tesla disk, alongside master and healing plants capable of consciousness-raising and -modifying. Naturally, human participation is essential to this revolutionary transformation: therefore the surrealistic audiovisual and performative journey is ensured by defining figures of the independent art and music scenes.

With their collaboration across species and disciplines, the Buharov brothers invite the public to explore a one of a kind, magical parallel universe: “We invite everyone to attune themselves to the eternal intentionfield and thus achieve clarity of will: listen to the intuition of the heart, work out alternative communication channels through the bio-information provided by plants and let us overcome the last obstacles separating us from freedom, with the help of the anarchist lodge of good opinion if necessary.”

Presented for the first time after its Graz premiere in the cooperation of tranzit. hu and Trafó House of Contemporary Arts, this unique performance is the closing event of tranzit. hu’s Regime Changes annual program series. Together with their plant allies, the artists transform the ceremony hall of the Center of the Vasas Federation of Metalworkers' Union into the site of the eagerly awaited revolution.

Partner of the event: Trafó House of Contemporary Arts 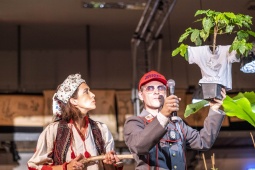