An International Networker of East-European Conceptualism. Homage to the Art Historian László Beke (1944 – 2022)

An event at the Collegium Hungaricum in Berlin

László Beke was one of the first and internationally best-known Hungarian exhibition-conceptor of the post-World War II era, in the sense we use the word 'curator' today. He was the research fellow and later director of the Institute of Art History of the Hungarian Academy of Sciences, a museologist at the Hungarian National Gallery, director of the Kunsthalle, Budapest and professor of the Hungarian University of Fine Arts. His seminal high school art history textbook, The Interpretation of Artworks, has shaped generations of Hungarian students’ perspective on art.

As an art historian and theoretician, Beke followed closely and had a formative role in the development of the Hungarian neo-avant-garde. As a contemporary of the artists of the 1960s, he was fascinated by the then current international art trends in the same way as they were; on the other hand, while the neo-avant-garde artists were mostly ignored or ridiculed by official art critics, Beke acted as their open-minded and insightful theoretician.

Beke was a keen observer, one of the first to appreciate these new, progressive, neo-avant-garde artists who at the same time harked back to the classical avant-garde. He often visited their exhibitions in clubs and other marginal places of the art scene, and experimented with extra-institutional forms of exhibition and publication. In 1971, Beke created his legendary collection of Hungarian conceptual art, Imagination/Idea, and its genesis exemplifies his particular working method and way of thinking.
In a letter duplicated with carbon paper, he asked 29 young artists―16 of whom are included in the exhibition Magyar Neo-avant-garde in the 1960s/1970s of the Collegium Hungaricum Berlin―to sketch their ideas of an imaginary artwork on an A4 sheet of paper and to send them to him.

He kept the resulting works for 40 years in his home in a folder and showed them on request to his visitors, among them numerous art historians and curators from Germany and abroad. It was not until 2008 that the collection was shown to the wider public in an exhibition organized by Dóra Maurer. Today, the collection is accessible as a facsimile book in both Hungarian and English.

László Beke's international contacts made him an ambassador of Eastern European conceptual art beyond national borders. His importance is comparable to that of Jindřich Chalupecký in the then Czechoslovakia, Jerzy Ludwiński in Poland or Bazon Brock in the Federal Republic of Germany. This is evidenced, among other things, by the fact that he curated the Eastern European section of the major 1999 exhibition Global Conceptualism at the Queens Museum in New York.

László Beke died in Budapest on January 31, 2022. One year after his death, the Collegium Hungaricum Berlin commemorates his extraordinary oeuvre with this event.

18:00 Coefficients: Reminiscences of the participants and organisers of the unrealized exhibition, 'Imaginations' (2018, made by Zsuzsa László in the framework of the exhibition of tranzit.hu-Municipal Gallery-Kiscell Museum Budapest, 1971 – Parallel Nonsynchronism, camera and editing by Benedek Bognár, Zsuzsanna Simon; 59'52)

Screening in Hungarian with English subtitles.

The conversation is in English. 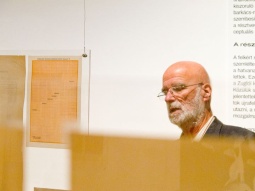