During the 2012 Bankito Festival , among others, within the framework of the Hallgatoi Halozat (Students’ Network) or the Legislative Theatre there is particular emphasis on issues such as participation, act, social activity, spurring the community, or generation change. Consequently, tranzit. hu asked the Pseudo Race group (Orsolya Bajusz, Virag Bogyo, Csilla Hodi) to realize a less artwork-centered, performative, participatory contemporary art project.

The Pseudo Race group, that is, in their more common and generic name, the P.R. group is a collective of young artists, constantly in flux. Its two founding members, Virag Bogyo and Csilla Hodi, students of the Moholy-Nagy University of Art and Design Budapest, have been working together as the P.R. group since 2010. Nevertheless, with each of its works and actions, the group expands to engage more people, and the P.R. monogram is likewise adjusted, “context-specifically,” to each project. In the course of its work, the P.R. group addresses current social issues, discourses, and cultural traditions: with its humorous, ironic, and awareness raising actions, the group intervenes into the public space, or offers amusing solutions to it. Thus far, they have touched upon issues, such as prostitution (Pax Romana group: Obscene, 2011), power, surveillance, diplomacy, and their transgression (Permanent Resident group: RAINBOW TOURS—Collective Border-crossing ball game, 2011), religious and national traditions (Patriot Riders group: King Saint Stephen, 2011), the situation of homeless people in Hungary (Poverty Riots group: Trashy Advent! 2011).

For its project LIBERAGILITY, realized within the 2012 Bankito Festival, the P.R. group transforms into the Pseudo Race group, during which the members collaborate with Orsolya Bajusz, a young Hungarian artist currently based in London. Orsolya Bajusz first studied at the Glasgow School of Art, then at the University of Applied Arts in Vienna. She works with motion picture, and also creates performative installations, discursive events in collaboration with Glasgow-based artist Laura Yuile. For their art actions, as artist-curators, they adapt and appropriate capitalist principles, the framework of service economy, and the mechanisms of consumer culture. In their work they look into, not without irony, neoliberalism, labor, ethics, or skills, among others.

The Pseudo Race group realizes on the square next to the Toszinpad (Lake Stage) LIBERAGILITY, a performative installation, an intellectual and physical obstacle race track to test the participants’ presumed liberal abilities and thoughts. Appropriating the form of ability parks, agility dog races, and educative toys, LIBERAGILITY raises questions, in a playful manner, about certain liberal values: egalitarianism, freedom of speech, tolerance, solidarity, self-determination—based on the artists’ own life experiences, and from the perspective of Hungary’s current social, political, economic, and cultural situation. The players of the obstacle race track may face the degree of their tolerance; or the tensions and antagonisms between the rules of certain games and their possible solutions may encourage the participants to reassess their self-image. Several volunteers help as “quizmasters” in operating the obstacle race track. On the occasion of this project, we have also made a short video interview series (see tranzit. hu’s vimeo channel), in which we have had discussions about the course liberalism has taken in Hungary, during and since the regime change. 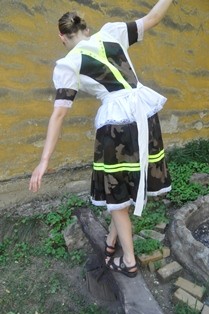