Exhibition and discussion around the graphic works of Janos Major

The theme of the exhibition is the disguised Jewish identity in relation to the works of János Major, and its re-reading in the works of anthropologist Gábor Csillag and artist Marcell Esterházy.

The exhibition Taboo Subject presents works by János Major which deal with the theme of Jewishness and of the artist himself as a Jew. Major paradoxically appropriates representations of Jewishness, by turning them against himself, often using pornographic imagery. Most of the exhibited works were made during the socialist period in Hungary, when ways of dealing with Holocaust experiences, anti-semitism and Jewishness could not be part of an open public dialogue. The exhibition and the discussion endeavor to problematize the present day possibilities of taking ownership of a Jewish identity. Where are we at in understanding and processing the legacy of the Holocaust, what contemporary artistic productions deal with this subject, in Hungary and internationally? Can we say that more than twenty years after the political change of 1989, that there is an open social or artistic discourse on this subject ?

János Major (1934–2008), graphic and conceptual artist, was a defining figure of the Hungarian neo-avantgarde. The exhibition “Leading the Dead” – The World of János Major which attempts a contextualizing survey of Major’s works, curated by Dániel Véri, opened on March 12, 2013 at the Barcsay Hall at the Hungarian University of Fine Arts, Budapest. The exhibition Taboo Subject at tranzit. hu attempts to put into context those works that deal with the artist’s Jewishness— aiming thereby to contribute to a deeper understanding of his oeuvre.

János Major depicted his own Jewishness with a surprising freedom and a ruthless self-mockery. By appropriating the language of anti-semitic representations, by rendering his own Jewishness in a grotesque manner, he probed the meaning of anti-semitism, and the attempts of processing Holocaust trauma and its failures. The main characteristic of Major’s form language is the mixing of caricature, text, pornography, and forced perspective . “The phenomenon when a proximate and a remote geometrical shape meet in one point on a plane, but not in reality, I call this: coincidence” – wrote János Major. Conflating the notions of forced perspective and coincidence, Major analyzed the relation of true and false, appearance and reality. Thus the false perspective is not only a play with planes and shapes, but a form of expression by which he dealt on an abstract level with profoundly complex themes.

Gabor Csillag’s conceptual framework “Jewish Identity Under Socialism/ Disguised Identity"—conceived for the exhibit - is designed to help with understanding the socio-cultural milieu, and the manifestation of disguised identities in everyday objects. This conceptual framework is also the point of departure for an installation by artist Marcell Esterházy, realized for the exhibition.

As Csillag notes: “With regards to the Holocaust and Jewish identity in general, the state socialist system offered two types of reaction: an international (identity-dissolving, identity-denying) utopia; and also a militant anti-fascism, in which, instead of comprehending or making peace with the past, only revenge was possible. The socialist internationalism was offered up as an ideological refuge, in which Jewish identity could be, if not really worked out, but somehow integrated —mostly by denial and forgetting. From the perspective of socialist internationalism (universalism), Jewish particularism, nationalities and ethnicities, became “irrelevant.” For survivors this framework could not provide a space for working through Holocaust experiences or defining identity on their own terms. In consequence a peculiar culture of disguise and dissimulation emerged, in which a relationship to one’s Jewishness, a Jewish background, could only be communicated in a coded, secretive, semi-public way.” 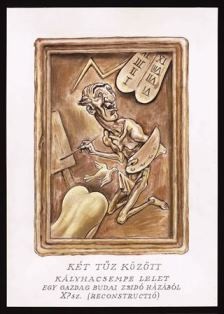