Anca Benera and Arnold Estefán: We Were So Few And So Many Of Us Are Left

At the seminar of the Free School for Art Theory and Practice connected to the exhibition, we address the Romanian and Hungarian political situation from a civic-activist perspective.
See more about the seminar: http://hu.tranzit.org/en/free_school/0/2013-10-11/we-were-so-few-and-so-many-of-us-are-left

Bucharest-based artists Anca Benera and Arnold Estefán have been present individually on the art scene in Romania and internationally for at least a decade. They have been working together since 2010 on art projects dealing with the relations of globalization processes and the nation state, as well as with their various understandings and mechanisms. We Were So Few And So Many Of Us Are Left is their first exhibition in Budapest, which was presented earlier this year at the tranzit. ro space in Bucharest

In 2013, the price of gold for April delivery has risen at the New York Stock Exchange by 0.9%, after the bailout programme for Cyprus, including a levy on bank deposits has stirred the financial markets. In 1916-1917, 93.4 tons of gold from the Romanian treasury were transferred to Russia for safekeeping, wherefrom they never returned. On the basis of a contract from 1935, Romania is owed a few billions of EUR by Germany. Cuba also has a debt to Romania of 1.2 billion American dollars (according to the exchange from transferable roubles). Viktor Orban sends personalized letters to Romanian citizens who are Hungarian ethnics in order to gain more votes. On 19-20 March 1990, in Târgu-Mureş there took place street clashes between Romanian and Hungarian ethnics, that ended with several hundred victims. At present Russia avoids the subject of the Romanian treasury, Cuba invokes the mutual aid between (former) socialist countries and Germany is busy increasing Cyprus' debt.Some of the fundamentals of the nation-state, such as economic policy and foreign affairs are today question-marked by accelerated globalization, supra-national deciding forums or immigration. At the same time we are witnessing a coming back of the nation, emphasized in its – often pre-modern – traits, such as ethnicity, religion or language.

Anca Benera and Arnold Estefán analyze the nation-state where this touches the verge of the fictional; they use the rigid and apparently immutable frames which the nation-state created in order to legitimize itself (laws, language, history) and take them literally, thus underlining their limits, given by their formal and contextual character. The two artists research documents, treaties, official statements, media reflections, years and facts, statistics, agreements, renegotiations, deciphering within the propaganda, reminding of forgotten promises, bringing face to face, to mirror each other, the contradicting versions, pushing to the extreme their logical consequences.

At the opening, starting at 7 pm, the two artists perform from the series Pacta sunt servanda the chapter „Fekete március 1990/ Black March 1990,” which investigates the press coverages of the inter-ethnic conflicts between Hungarians and Romanians in Târgu Mureș. A previous chapter of the series is shown in the exhibiton in a video installation. Here Benera and Estefán read out, simultaneously in Romanian and in Hungarian, from their respective history schoolbooks, passages treating the same moments, but offering contradictory perspectives.

In their work Isa, por ës homou vogymuk, they redefine a symbol, the kopjafa, decontextualized from its original cultural and historical settings. In Hungary, this piece of work has a unique frame of reference: after the political change of 1989, the meaning of the kopjafa symbol has been re-interpreted on political terms. Arnold Estefán has recently received Hungarian citizenship, and thus was sent a personalized letter signed by the current prime minister of Hungary, Viktor Orbán. Anca Benera, who only understands intuitively and very little this language, made a free translation of the letter

With a combination of almost scientific detachment, aesthetic precision and irony, Anca Benera and Arnold Estefán bring to the spotlight the never exhausted subjects of the day, offering them as departure points for broader debates, to which every one of us can take part.

Image: Anca Benera and Arnold Estefán: We Were So Few And So Many Of Us Are Left (tranzit. ro/ Bucharest) 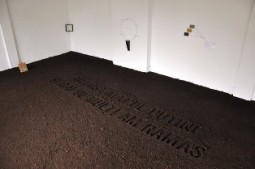