{roma} The contract to sell the ethnicity


The Sostar? / Why? {roma} art group initiates a ceremonious contracting with institutions and individuals about selling the attribute (Rom-Cigány-Gipsy). With this performative act, the group does not intend to sell its own ethnic origin, but aims to change the schizophrenic situation that forces the members of this group, as Roma writers and artists, to take an ethnicizing and moralizing role. The exhibition endeavors to create the missing artistic, cultural policy, and social discourse, that defines Roma writers and artists as part of the contemporary art and literature canon. The two-sided agreement, initiated by the group, in terms of the emancipation of Roma in Hungary, could assist in establishing long-term collaborations. The art group members consider it to be of great importance to deliberately define and recognize the memory and culture of the Hungarian Roma community, thus creating the conditions for Romas to define themselves as a cultural minority accepted by the majority as well.

The exhibition critically examines and deconstruct the concepts (Rom-Cigány-Gipsy), as a cultural and artistic strategy, with visual and communicational tools. One of its main goals is to demonstrate examples in which—besides and beyond the minority identity—the sense of being Hungarian and European appears in the memory and self-identification of the Roma minority.

The contract is a shared position of the The Sostar? / Why? {roma} art group and the invited guests; ; that is, to test the accepted viewpoints, which makes it possible to mutually position ourselves and each other. It seeks an agreement, the stake of which is, to deliberately and collectively shape the future of the Hungarian Roma community and that of the Hungarian majority as well.

At the exhibition opening the manifesto of the group is presented, and afterwards András Kállai performs his piece entitled Balancing Attempt. One of the spaces at tranzit. hu is transformed into a contracting hall, which—similarly to wedding halls—provides a ceremonial location for agreements, vows, and long-term initiatives. It is also possible to contract with the members of the Sostar? / Why? {roma} art group during the opening.


Trailer from SOSTAR? WHY? artist collective on Vimeo.

The The Sostar? / Why? {roma} art group was founded in 2013 in Berlin by international, Hungarian, and Hungarian-Roma members: writers, poets, artists, and film professionals with Lovari, Băjás, Carpathian-gypsy, and Romungro origins. As an independent art group it connects consciously to the antecedents that constitute worldwide the self-determination, as well as the emancipatory and civil rights movement of the minorities. This is also part of their manifesto Roma Renaissance, an Artistic Manifesto (2013) “We, as older and younger Roma artists, Roma intellectuals, and our friends, wish to make decisions ourselves, we wish to determine ourselves, our history and cultural role in Europe (…)”

André Raatzsch is a Hungarian + German + Roma (băjás) + European artist and curator living in Berlin. In 2012 he established The Roma Image Studio, a platform for critical art in Berlin, and in 2013 he was a founding member of the Sostar? / Why? {roma} art group. Since 2007 he has been examining critically and self-reflectively the processes of himself becoming, or being turned, into a Roma artist from a contemporary artist. In the last few years he started a self-positioning experiment, so that he could formulate the reason why he is not able to completely define himself neither as Roma, nor as Hungarian contemporary artist.

Participants of the exhibition:

The exhibition is the third part of the program series entitled Intersections I-II-III. realized in the framework of the ERSTE Patterns Lectures “Roma representation after the cultural turn” (project leader: Andrea Pócsik). 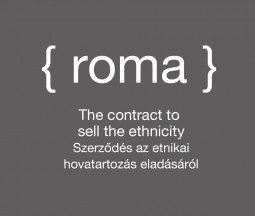