As a part of tranzit.hu project War of Memories we restaged the peace conference of Trianon with the participation of seven secondary school history teachers, five art professionals, and with the contribution of Gergely Kispál (actor) and Tehnica Schweiz on the basis of the simulation game developed by Planpolitik.

This simulation game was developed as an experiment in the search for a participatory format for the discussion of local memory politics. In Hungarian public opinion “Trianon” signifies the peace treaty Hungary was obliged to sign after WWI, the traumatic memory of which has been passed onto following generations. We applied a game-format, "planspiel"—which is to create a didactically simplified decision-making situation in which participants take on the roles of relevant actor—to restage this historical event. It is a method of learning by doing, and is often applied in problem-solving education. tranzit.hu adapted a simulation game format originally developed for the Paris Peace Conference by the Berlin based planpolitik group, but with an important alteration. While the original game focused on the opposition of the winner and defeated great powers as well as the tensions between the players’ differing real and assumed nationalities, the tranzit.hu planspiel unpacked the problematics and the contradicting definitions of nation states in the Central-East European region. The participants are all Hungarian, but come from very different backgrounds, which are then blurred by their equal motivation to experience this historical event as a game.

The project is a methodological experiment, introducing political education in a playful way, and approaching historical trauma by looking critically at historical facts and “acting out” revisionist and chauvinist sentiments instead of suppressing them.

Participants of the simulation game:

Photos of the event by Péter Rákosi

The simulation game played at tranzit.hu is the adaptation of “Renegotiating Peace. Versailles and Beyond” which was developed by Planpolitik (Berlin) in 2014. 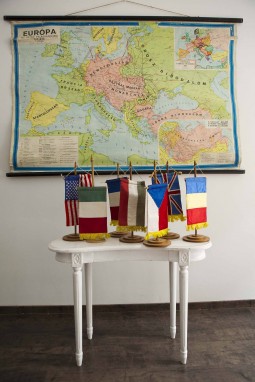