I actually thought of you, since it is always a challenge to involve the locals in the Bánkitó Festival, but nothing has ever happened in this regards.

tranzit.hu participates for the fifth time at the Bánkitó (Lake Bánk) Festival, a unique summer festival located in Northern Hungary, which was initiated by the Jewish youth organization Marom Club Association. This year, tranzit.hu invited the Csakoda (One way) artist group to realize a project at the Festival. The Local Service project revolves around the concept of locality as well as the analysis of the meaning of the term “locals.”

Locals are the priority target group of socially-engaged art projects. They address and include them, make them co-authors, in the name of solidarity. In participatory art actions, however, the locals—as cultural others—are often instrumentalized for the realization of the project; thus, the difference to be abolished between us and them is only augmented.

The Csakoda group, invited by tranzit.hu, has been traveling through the small settlements of Hungary since 2011, in order to expand the discourses of contemporary art also to those communities who are frequently excluded from them. The Local Service project revolves around the concept of locality as well as the analysis of the meanings of the term locals. The group chose Bank's deserted railway station as the project's venue, the spaces of which they will construct along the lines of waiting rooms and common internet/multi-media areas located at various railway stations they themselves visited. The venue can be accessed during the festival by a draisine driven by the artist group.

The railway station will be open during the festival daily from 2 pm to 6 pm.

The project is coordinated by Gyula Muskovics

Csakoda is a group of young artists, established in March 2011 by Dominika Trapp and Márton Dés. With their traveling exhibition program since 2011, The Migration of Pictures in Hungary, the group has visited various settlements in rural Hungary. “The aim of the exhibition series is to make our works accessible to those who live outside of Budapest, and are often marginalized from the contemporary art discourse. Also, we would like to broaden our knowledge and would like to meet new perspectives and opinions." The name of the group Csakoda "could be translated as 'Only/Merely there' but this word also refers to the Hungarian name of a 'one-way train ticket,' by which it implies geocultural and infrastructural meanings as well." 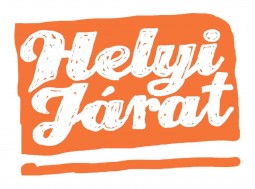