Cartography of Artist Solidarity – Narratives and Ghosts from the International Art Exhibition for Palestine, 1978

On view: Thursday – Saturday, from 2 pm to 6 pm until July 2, and by appointment until 2nd of September, 2016 at office@tranzitinfo.hu

Cartography of Artist Solidarity is an archival and documentary exhibition that begins from an excavation of the story of the International Art Exhibition for Palestine (Beirut, 1978) and proposes a speculative history of politically engaged artistic and museographic practices in the milieu of the international anti-imperialist solidarity movement of the 1970s. The exhibition takes us back to the era of the Cold War, a time when cultural diplomacy was an important instrument of competition and mediation between the ”great powers.”. The anti-imperialist movement endorsed anti-colonial struggles and movements of national self-determination. Ethnic and religious identities were subdued in larger questions. All the tensions accumulated by this neutralization have more and more tragic consequences today, like the Syrian war and the migration crisis. The post-communist condition, the legacy of the antagonism between the two, capitalist and socialist camps has imprinted the self-image of former Eastern Europe for decades after 1989. The once thriving diplomatic, economic and cultural contacts established from the 1960s with the so-called “developing countries” were dissolved and dismantled. Cartography of Artist Solidarity is an exhibition that proposes a travel to the time of the “Friendship of Nations.”

Hungary’s diplomatic and cultural relations with the so-called Third World were initiated and administered by several state institutions that no longer exist, such as the National Peace Council (1950–90), the Solidarity Committee (1962–90), and the Institute of Cultural Relations (1949–90). They all coordinated closely with the Ministry of Foreign Affairs and the National People’s Front (1954–90). Hungarian artists were allowed to join the state-sponsored international solidarity initiatives on the invitation from public institutions, provided that they were deemed conformist. "In contrast, the self-organized solidarity actions by a generation of artists in Hungary were penned in isolated circles of dissidence.

As a member of the anti-imperialist movement, Hungary, like the other countries of the former Eastern Bloc was in solidarity with the Palestinian struggle. The relationship was consolidated in 1975 when the Palestine Liberation Organization established an office in Budapest. In addition to the shared anti-imperialist, anti-fascist convictions, the collaboration and engagement with the PLO instigated sophisticated and vivid debates on interpretations of communism, democracy, national self-determination, socialist economy, the emancipatory and political potential of culture and militant art. As part of this cooperation, the Budapest Museum of Ethnography hosted an itinerant Palestine folk art exhibition in 1978. Yasser Arafat, the PLO’s Chairman, traveled to Budapest to attend the exhibition’s opening and engage in diplomatic exchanges with János Kádár, the Secretary of the Party.

The International Art Exhibition for Palestine was organized by the Plastic Arts Section (under the Office of Unified Information) of the Palestinian Liberation Organization (PLO). It was the seed collection for a museum for Palestine, but until it could return to a free and democratic Palestine, it was presented as a ”museum in exile,” or an internationally itinerant exhibition. At the instance of the opening in Beirut in the spring of 1978, the exhibition hosted approximately 200 works donated by nearly 200 artists from 30 countries, with Gyula Hincz as the only Hungarian participant. He was 74 years old at the time, and the artwork he donated was an etching from his ”peace cycle” dating to the 1950s. Hincz started his career in the late 1920s, as an expressionist painter, and after WW2 he was a teacher and later the head of the Academy of Applied Arts. A popular illustrator and mural artist, Hincz received several state commissions, and represented Hungary at the Venice Biennial on several occasions. While he maintained his expressionist style, never complying with the diktat of social realism, he nonetheless often fused folk motifs with political imagery.

Cartography of Artist Solidarity is the outcome of several years of research conducted by writers and curators Kristine Khouri and Rasha Salti. They have presented their findings in the form of an exhibition in two previous occasions, under the title Past Disquiet: Narratives and Ghosts from the International Art Exhibition for Palestine, 1978 at the MACBA (Barcelona) in 2015 and the HKW (Berlin) in 2016. Cartography of Artist Solidarity, on view at tranzit.hu, presents selection from these two previous editions of Past Disquiet. The research also reconstructs the stories of the Museo Internacional de la Resistencia Salvador Allende, the internationally touring exhibition Art Against Apartheid, the artist-run Salon de la Jeune Peinture in Paris, and radical artist collectives such as the International Brigades of Anti-Fascist Painters. In addition, Cartography of Artist Solidarity proposes to revisit the intersecting roles of cultural diplomacy, grassroots international solidarity actions, and the role of artists in the 1970s and 1980s in Hungary. Artist Andreas Fogarasi also presents a new work that reflects on Gyula Hincz’s participation in the 1978 Beirut exhibition.

The exbition at tranzit.hu is supported by the technical equipments of Budapest Gallery, Fuga - Budapest Centre of Architecture, Studio of Young Artists.

Cartography of Artist Solidarity is curated by Kristine Khouri and Rasha Salti, and is a co-production of tranzit .hu, HKW and MACBA. Originally this project was conceived and presented as 'Past Disquiet: Narratives and Ghosts from the International Art Exhibition for Palestine, 1978' by the Museu d'Art Contemporani de Barcelona (MACBA) in 2015. Its Berlin iteration in 2016 was co-produced with Haus der Kulturen der Welt (HKW).

The research for this project has been made possible by the generous support of Rana Sadik and Samer Younis, the Sharjah Art Foundation, the Arab Fund for Arts and Culture (AFAC), ZedGrant, the A. M. Qattan Foundation, and Tensta konsthall. 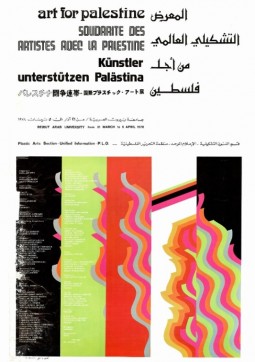