Our Heart Is a Foreign Country

Friendship as an alternative in a normal world


The international group exhibition Our Heart Is a Foreign Country presents the intimate field of play that unfolds in friendships; a place that offers the possibility of departing from the expectations, ideals, and norms constructed by society. The show gives a peek into the mysterious universe of role shifts and mischief that lies beyond the normative spheres of political control, the law, the church, and the family that is responsible for passing on cultural patterns. At the same time, it points to the liberating power of this versatile and personalized mode of human connection in a culture where modes of experiencing love and intimacy are determined by moral codes, institutionalized rituals and the legal framework of marriage. Our Heart Is a Foreign Country asks the question of whether friendship can be a way of life and the basis for a queer politics beyond identity categories and gender roles. Through this, friendship emerges as an alternative to the heteronormative social structures that enforce unequal power relations.

Friendship is the smallest unit of society and as the most honest and equal bond between two people, it has a history of many centuries in Western philosophical thought. It is a type of human relationship that is pure, exists for itself, and is based on dialogue and equality. According to British sociologist Anthony Giddens, this kind of connection can embody the ideal of democracy in modern societies. It is an alternative reality whose rules and roles can be rethought by participants with the same ease that they were created with. In addition, friendship based on the recognition of and continuous reflection on each other holds a creative potential that enables the realization of both shared and individual visions. Friendship means being ourselves through experiencing another human being, and therefore not only is it the purest manifestation of intimacy, but it also critically reflects upon the normative institutions of love that are not always—or only partially—able to live up to the universal promises attached to them.

The exhibition moves beyond the intimate unit of private space and points out that friendship as a way of life carries the potential of political resistance. This is because the collective practice of continuously questioning roles and behavioral patterns dictated by society can have a subversive force and contribute to the gradual rethinking of readily given values. Not only does friendship emerge in feminist critique as a possible answer to patriarchal social structures, but it also presents an alternative for homosexuality. In a 1981 interview, Michel Foucault explains that the basis of social taboos surrounding homosexuality is precisely that we realize only one form of sexual identity that we stubbornly stick to. While the gay rights movement emphasizes the political relevance of entering the public sphere, that is, the normalization of gays' and lesbians' modes of relation, the French philosopher saw potential in the fact that homosexual forms of life defies representation because it lacks a canonized cultural and historical past. According to Foucault, if homosexuality proceeds in the indefinable direction of friendship, it opens up the possibility of experiencing the wide range of relations that can exist between two people and generate pleasure. He describes a relationship that is yet to take form, that has to be invented from the beginning to the end, and in which emphasis is shifted from sexuality to possibilities. Through this, he conjures up the image of a queer politics beyond identity categories, one that finds its allies along the lines of force that tie together in an unforeseen manner within the amorphous space of friendship.

Some of the artworks are sexually explicit, parental guidance is advised. 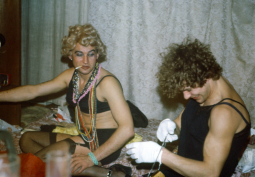