exhibition of the three-channel film

tranzit.hu presents the three-channel film Two Meetings and a Funeral (2017) in Budapest.

The project’s presentation in Budapest builds on tranzit.hu’s earlier engagement with the idea of a "pan-peripheral network." With this visionary concept, Eastern Europe is proposed to be viewed not in relation to the West, as it was constructed in the bipolar geopolitics of the Cold War, but in its affinity to the “Third World,” as it was positioned in Socialist Internationalism.

Naeem Mohaiemen’s work involves writing, film- and installation-making. His three-channel film Two Meetings and a Funeral premiered at documenta 14 in Kassel and is presented for the first time in Eastern Europe at tranzit.hu in Budapest. Following the earlier films of Mohaiemen (The Young Man Was series) on the blind spots of the “global revolutionary left”–– in Bangladesh, Lebanon, Japan, and Germany––in the 1970s, Two Meetings and a Funeral looks at the eclipse and the contradictions of the Socialist engagement of the Third World, which had its peak in the 1960s-70s. In this new film, the focus is not the self-organized activities of the militant, outsider left, but rather the state level politics of the left in actual power, in “Socialist-aligned” Third World countries in the 1970s.

"The Third World was not a place, but a project,” according to the book The Darker Nations (2007) by Vijay Prashad. This was meant to be a utopian alliance where the Global South would reconfigure planetary leadership, ending Euro-American dominance. In Two Meetings and a Funeral, two different alliance come into conflict. First, the socialist, anti-imperialist Non-Aligned Movement, which was founded in 1961 as a “third way” that did not align itself with Western or Eastern Bloc powers (though in practice, there were often slippages). Secondly, the Organization of Islamic Cooperation, which was established in 1969 as a religion-based, multi nation state alliance. The sharp distinction between these two platforms unfolds against the backdrop of Bangladesh's history, shortly after achieving independence in 1971. In particular, an ideological pivot comes into play when newly independent Bangladesh, fighting to legally establish its’ nation state status, first joined the Non-Aligned Movement meeting in Algeria in 1973, and a year later, participated in the 1974 meeting of the Organization of Islamic Cooperation in Pakistan. As a larger framework, the pivot from Socialism to Islamism is one of several elements that contributed to the collapse of the “Third World project.” Other factors included the tolerance of autocratic leaders within NAM, who spoke of liberation for the western colonies, but reproduced the logic of colonialism on post-liberation societies.

What comes after an incomplete liberation from colonial powers? What consequences does the failed Left of the 1960s-1970s have for the present and the future? These are some of the questions Two Meetings and a Funeral revolves around.

The exhibition venue correlates Two Meetings and a Funeral with the Hungarian workers' movement, with the first local trade union that went through countless turnings points in its history. The Budapest Association of Iron- and Ore workers was formed in 1877, which was then expanded in 1903 to become a nation-wide federation of the Hungarian iron- and metalworkers (Vasas Federation of Metalworkers’ Union). In the interwar period, popular education and progressive culture also played an important role in the unions’ life. Moreover, beyond its advocacy function, the union can also be seen as one of the sites of resistance to the rise of fascist dictatorship in Hungary in the 1930s and early 1940s, through the course of which several members of the union lost their lives. After the Second World War, the union lost its autonomy, advocacy role, and grassroots character, and was incorporated into the rule of the Hungarian Communist Party. It was due to this subservient role that one of the most infamous Hungarian Stalinist-type show trials of then Minister of Foreign Affairs László Rajk took place in the large auditorium of the Metalworkers’ Union in 1949. Following the regime change of 1989, The Vasas Federation of Metalworkers' Union, adapted to the current era, still functions in their central building in Magdolna Street.

The central building of the Vasas Federation of Metalwokers' Union was built in 1928 with Art Nouveau and Modernist components, the nucleus of which is the large auditorium, decorated with stained glass windows of iron- and metalworkers. The venue of the exhibition thus also refers to one of the elements of Two Meetings and a Funeral: the film travels through the residues of transnational architecture in New York, Algiers, and Dhaka––symbolic buildings which have ideologically eroded, but are still in use.

In conjunction with the exhibition, a special issue of tranzit.hu’s online journal Mezosfera (mezosfera.org) will also be published, the focus of which is socialist solidarity; the analysis of its transnationality, complexity, and contradictions. The issue includes texts on Hungary’s cultural-diplomatic relations with Third World countries, the contemporary relevance of non-alignment, as well as cultural events that came to being around the idea of Pan-Africanism and Pan-Arabism in the 1960-70s. The Mezosfera special issue launch event takes place on May 28, 2018, 6:30 pm.

tranzit.hu Free School for Art Theory and Practice
Reading group around Two Meetings and a Funeral 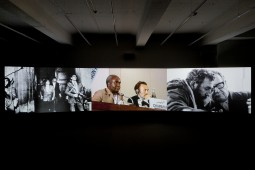