Art Always Has Its Consequences

"Everything that is public is a proclamation, if you will." (Tibor Hajas)

Why do artists write texts? When and why this genre was developed and what significance it gained in Eastern Europe in the last sixty years?
The reader, published by Stenberg Press, is a collection of manifestos, critical texts, and writings addressing public issues written by artists and artist groups from Eastern Europe between 1947 and 2009. The publication is result of an international curatorial research collaboration of four organizations: What, How and for Whom/WHW, Croatia; New Media Center_kuda.org, Serbia; Museum Sztuki in Łódź; and tranzit.hu. 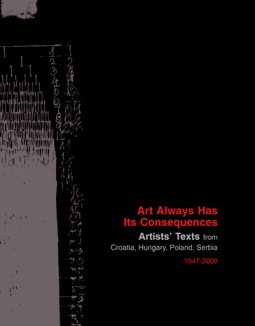