Screening and Discussion with Miriam Bäckström

As a joint program of the September seminar of the Free School of Art Theory and Practice the screening of two films by Miriam Bäckström will take place in the 2B Gallery on the 21st of September from 1800 hrs.

Miriam Bäckström Swedish artist became known at the beginning of the 90s for her photographs of evacuated interiors. Recently she increasingly turned to the moving image, making films where she is collaborating with actors exposing the often confounding symbioses of fact and fiction, real and assumed personalities.
In the film Rebecka we see Rebecka Hemse, an actress having a conversation with Miriam Bäckström, who is sitting behind the camera. Miriam asks, Rebecka answers – the set-up seems to be unambiguous at the beginning. But soon the viewer realizes that it is almost impossible to know who is who, which words and thoughts are Miriam Bäckström’s own, and what is added by Rebecka Hemse, and if Rebecka is playing the character of Rebecka or the real person Rebecka, or if she is actually Miriam Bäckström. By this the artist erases the hierarchy between the creator and the actor creating a constant uncertainty: who has the initiative, who is speaking for themselves and who is acting.

In Kira Carpelan Bäckström takes one more step forward. Kira Carpelan is not an actress, but a person of flesh and blood. She is a 32 year-old artist, just graduated, who was invited by Bäckström, to make an exhibition for her in the Färgfabriken in Stockholm. She was offered access to everything, including the financial and infrastructural sources of Bäckström, her diaries and even Bäckström herself, as a person and as an artist. But she had to agree to let Bäckström document the preparation of the exhibition. And the game has begun – but now with real persons. Who is controlling the process? Who is the artist? Who is using whom? When does it become art? By Kira or by Miriam?

After the screening the participants can raise questions and discuss it with Miriam Bäckström. 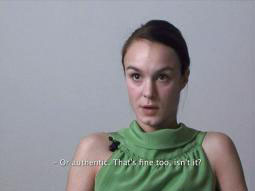