There is a Crack in the Museum of History. Is That How the Future Gets in?

At the end of the Cold War, tired of the future and its betrayed promises, we embraced reality as it really is. Its name was the West, an ahistorical identity block, which became the final destination of any possible progress. To move in history meant now only to arrive where the West already was.
Utopia, long believed to have forever disappeared at the end of the Cold War, might still be alive? It abandoned history as the medium of its prospective realization and turned to memory in which the past has become a new “promised land,” where everything could have been different than it really was, and where there are no limits whatsoever to our imagination. Now the past, as a dimension of hope, appears charged with contingency. It is no wonder that in our fetishistic obsession with the past, in which the boundary between remembering and forgetting is increasingly blurring, also the historical revisionism thrives marvelously. What once was historical consciousness that guaranteed our orientation in the time-spaces of modernity has evaporated into a myriad of memory cultures that, like a fog, hang over the post-historical reality. Now, another past is possible. Is this because there is nothing we can do about our future, turned into an impassable realm of historical necessity?

The public editorial meeting and conference in Budapest explores the changing notions of history and memory, advancing the thesis that today debates around museums, monuments, memorials, re-enactments, revisionist historiography, and rivalry between such traumas as Trianon and the Holocaust, constitute a major political battleground in Hungary as well as internationally, aiming to control the imagination of the past instead of the future. In addition to theoretical statements on current local and international urgencies of memory politics, contributors discuss what role artistic practices and the institutions of art play in shaping memories.


FORMER WEST: (2008–2016) is an extensive, long-term transnational contemporary art research, education, publishing, exhibition, and discursive project. It aims at developing a critical understanding of the legacy of the radical transnational citizen resistance to power in 1989, in order to both imaginatively reevaluate the present and speculate about the future.
www.formerwest.org.


The program series War of Memories is part of the project FORMER WEST, Culminating Phase: Edits, Annotations, Proposals project supported by the Creative Europe Programme of the European Union. 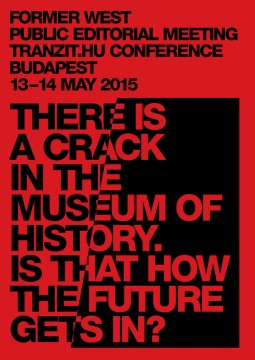