“I Have a Scream”*
What will 2016 bring? A new year of migration and asylum politics
Talk and workshop

In English and Hungarian

2015 has marked several turning points in migration and asylum policies in Hungary, as well as around Europe. As the “long summer of migration” peaked this autumn, the so-called “refugee crisis” radically polarized societal debates and political struggles around migration in the EU. Following the terrorist attacks in Paris, several European politicians—among others, the Hungarian government—used the widespread climate of fear and insecurity to reinforce and underpin their anti-immigration rhetorics.

Fences or open borders? In the past few months, a rapidly growing grassroots movement of volunteers and activists has opposed Fortress Europe’s politics of increased border control and mechanisms of exclusion, showing solidarity with migrants and refugees living in and arriving in Europe. They have played a crucial role in providing humanitarian support at the borders and in the future, they could also be at the forefront of fighting for the rights of refugees and migrants in Europe, forming the base of a bottom-up political resistance.

How to continue after 2015? What challenges and struggles do migrants and refugees living in Hungary, as well as NGOs and activists active in the area of migration and asylum policies face? What will, what should 2016 bring? Especially focusing on Hungary: is a politics based on exclusion and isolation, advocating “the need to protect the country” and the categorical rejection of the EU quota system, sustainable on the long term? What role and responsibilities does civil society have in the political struggles around asylum and migration?

The event will be kicked off by a panel discussion, followed by an exchange in smaller groups hosted by the guest speakers, to allow for more intensive dialogues, which each group will summarize in a closing round.

The everyday life and experiences of immigrants and refugees are focal points in the works of Babi Badalov, who is originally from Azerbaijan and is currently living in Paris. With the aid of the Kazinczy Living Library, on the second day of the finissage of the exhibition Poetical Activism, the audience will be given the opportunity to have a glimpse in the diary of immigrants and refugees living in Hungary.

The living library, which aims to challenge discrimination and stereotypes between different social groups, invites you to borrow “human books." Participants of the event get to read a “book” for 30 minutes, which is to say they get a chance to discover another person's life and some of his/her personal experiences within an open, respectful, and honest conversation.

The event will take place in Hungarian and English. We will have translators at hand in case someone needs help during “reading.”

2 pm to 2:20 pm: Introduction of the Kazinczy Living Library, readers get to know the rules of borrowing from the library
2:30 pm to 5 pm: Free “reading” sessions, every 30 minutes 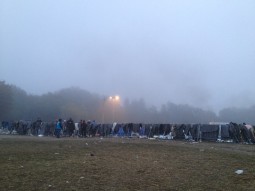