The Hungarian-French duo, Société Réaliste (Ferenc Gróf and Jean-Baptiste Naudy) worked together between 2004 and 2015. In 19?9, Société Réaliste simultaneously evokes the significant Hungarian historical events of 1919, 1949, and 1989: when the political regime either turned authoritarian or shifted to a democratic one. For 19?9, the artist group reworked a woodcut representing György Dózsa, made in 1928 by Gyula Derkovits, the most prominent pre-war Hungarian communist painter. György Dózsa, a famous Hungarian peasant leader who was a brutally executed military commander of the peasant uprising in 1514, was also heroized in Hungarian communist cultural policy. At first sight, one can observe two main differences to the original print. The one is that Société Réaliste replaced the date of “1514” on the burning crown of tortured Dózsa with the date “19?9,” which evokes simultaneously the Bolshevik revolution of 1919, the communist political turn of 1949, and the Regime Change of 1989, the latter which formalized genuine parliamentary democracy in the constitution. The other is that one can read the inscription “Dirty Parallel” on Dózsa’s chest instead of the original “Dirty Peasant.” Furthermore, on a closer inspection, one more divergence is visible. Dózsa, the communist icon, the cultic image disintegrates into words: “behind” the black and red image, the phrases of the Hungarian communist constitution of 1949 appear together with the “new,” democratic one of 1989. With this gesture, Société Réaliste stresses that the new, 1989 constitution is rather similar to the old, 1949 constitution, which, however, was modelled after the soviet constitution. The artist duo thus accentuates the pragmatic dialectics of permanence and revolution with the deconstructive, critical act of the “strike through.” “Dirty Parallel” not only refers to the soviet model, but it also implies the critique of the democratic “revolution” of 1989: as many of the economic and political elite made it to the new world after 1989, the paragraphs of the 1949 construction did not vanish fully either. 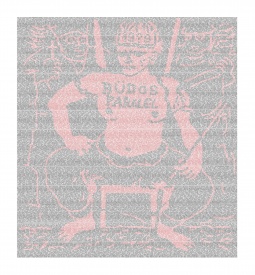