Kitti Gosztola: The Depths of Extraction, 2017
The Depths of the Extraction (2017) was one of the three sculptures that Gosztola made at the Steel Sculpture Workshop in Dunaújváros – a steel sculpture workshop that was established in socialist era Hungary in 1974, which then came to a halt in the 1990s, and was again re-opened in 2017. Gosztola’s three sculptures flesh out different aspects of metallic minerals extraction from the earth's crust, from antiquity to the turn of the century. The Depths of the Extraction depict the shapes as well as the ways to approach the ore-bodies in the ground, based on a technical illustration of a century-old adit system. The abstract work is also the impression of the underground landscape, and thus it can also be related to bioromantics or the possibility of total abstraction. 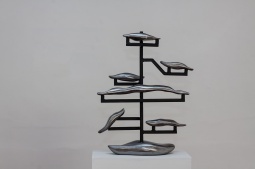