To take part in the seminar send an motivational letter in English to office@tranzitinfo.hu until December 10, 2010.

Contract entre les Hommes et l´Ordinateur
In the last 20 years, critical / conceptual art production opened the filed for new intellectual understandings of art. At the same time though, an “educational” and “sense-related” tone in text- and image production seemed to narrow all esthetic processes down to “sense production” – a move I find not only helpful in the development of artistic production, since art production is also about letting things happen in order to find out things we do not
know yet… The seminar is highly inspired by the tradition of texts dealing with the topic of (political) independence, and especially concerning Jaques Rancière’s concept of the "Ignorant Schoolmaster". Relating to his lectures about intellectual emancipation, I assume that only “art”; but nothing else, can be taught in the term’s conventional sense. As a consequence, I want to follow Joseph Jacotot’s thoughts from 1818, interpreted by Jaques Rancière. The main lecture to be learned from Jacotot is, that knowledge through education is like freedom: It will not be given, but it has to be taken. I will show some examples of my own production, reacting to the mentioned issues. We will continue with films, texts, and artworks that I find productive and fascinating regarding to the debate around “Knowledge” and “Unknowledge”. Examples include It, Elinor Glyn, 1927, Miracle in Milan, Vittorio De Sica, 1951, Performance, Guy de Cointet, 1974 and more...

Judith Hopf has a diverse practice that includes the production of objects and installations, alongside graphic works, performances, texts and film works. Her topics range from love to politics and are often developed in cooperation with other artists or friends. With that emphasis placed on collaboration, her films for example are characterised by a playfulness that veers between the acting out of everyday social roles and the choreography of fantastical impulses. Judith Hopf has exhibited widely, including solo exhibitions at the Secession in Vienna (2006), Portikus, Frankfurt (2007) and Badischer Kunstverein, Karlsruhe (2008); her films were presented at international festivals, most recently at Berliner Filmfestspiele Berlinale, at ICA London and at Steirischer Herbst, Graz. Hopf is Professor of Art at the Städelschule, Staatliche Hochschule für Bildende Kunst, Frankfurt. 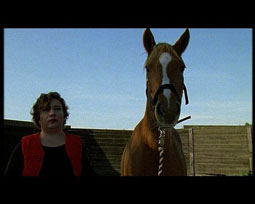